Youth should take up leadership of NRM grassroot structures - Dombo 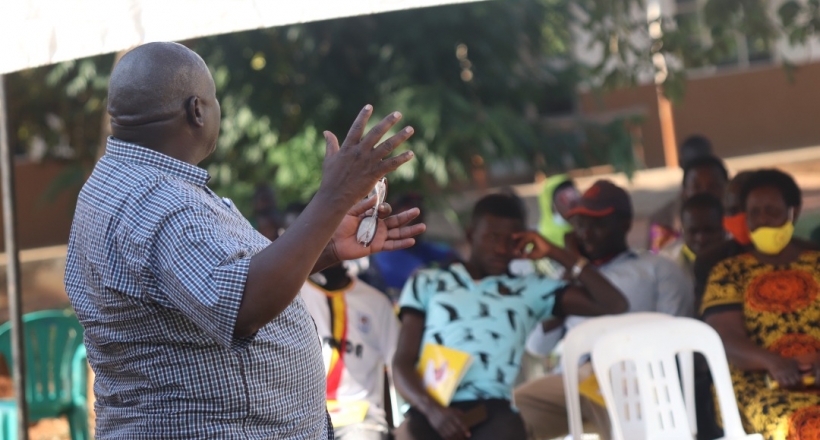 The National Resistance Movement’s Director for Communications and Public Relations, Hon Emmanuel Dombo, has said the party should attract youth into its leadership structures and activities as a way to ensure seamless transition and growth for generations to come.

Dombo was addressing party district leaders of Kayunga at Bbaale Secondary School in Bbaale Sub-county, Kayunga District on Tuesday. "AS NRM leaders, We have a responsibility of attracting youth  into vying for various positions  in our party in order to clear any doudts and beliefs that the  party belongs to people in old age," Dombo tasked leaders.

Hon Dombo, and his fellow director in charge of Mobilisation and Cadre Development led party secretariat officials and staff on a 4-day tour of the central region which started in Kayunga. The tour is part of a countrywide series that were launched last month by the party Secretary General, Hon Richard Todwong. The tours are targeted at galvanizing cohesion in the party and ensuring smooth working relations between the party secretariat and the grassroot structures. While launching the tours in Bukedi region last month, Hon Todwong said the party was setting in motion mechanisms to follow up on government development programmes as well as pledges and to supervise service delivery at the grassroots.

At Bbaale, Hon Dombo asked leaders to sensitive residents about the available government programs like Emyooga, Parish Development model and Operation Wealth Creation, and how these help to uplift communities from poverty and the subsistence way of living.

Hon Seninde cautioned party leaders to shun any forms of internal bickering and infighting, saying these have negatively impacted on the party support.

While speaking to NRM leaders of Bbaale and Galilaya sub-counties gathered at Bbaale Secondary School in Bbaale Sub-county Kayunga district, Hon.Seninde  said  leaders should never be sources of division and conflicts among their people  instead should be  pillars  of unity and guidance with in their communities.

"Our cardinal role as leaders should be to attempt any means of causing harmony and consensus among the people we lead instead of fueling internal conflicts which in the long run harms the image of party," Mrs Seninde said.

She explained that the purpose of the regional tour is to listen to the people on ground and collect their views on how the NRM party can revive its vibrance in Kayunga and central region at large.

Former Bbaale constituency Member of Parliament, Hon Suliaman Madada asked the people of Kayunga to desist from conflicts over land and tribalism since those hinder progress and keep communities backward.

The meeting was also attended by Hajjat Faridah Kimbowa, the Chairperson National women council among others.