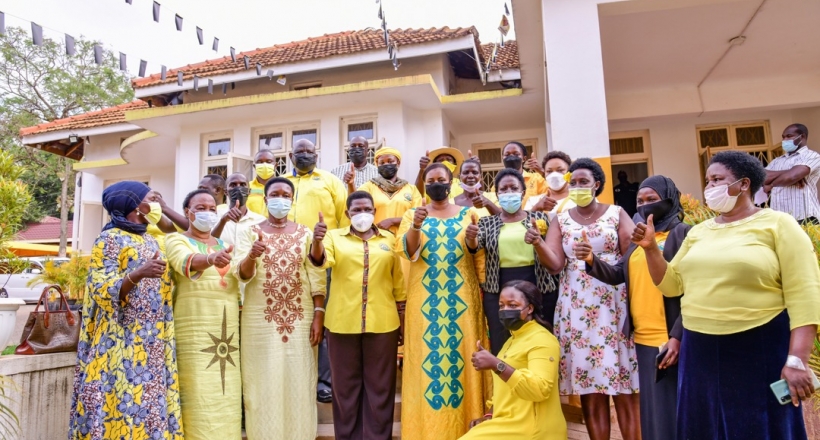 The National Resistance Movement Party Chairman,  also the President of the Republic of Uganda, Yoweri  Tibuhaburwa Kaguta Museveni has today Wednesday 15th September,  2021, made 77 years of age. To commemorate this milestone, the party Secretariat organized celebrations at the party headquarters at Plot 10, Kyadondo Road in Nakasero, Kampala.

The occasion was graced by the Deputy Secretary General, Rose Namayanja Nsereko, who in her speech described President Museveni as an iconic leader and a national liberator, whose deeds are testified to and witnessed globally.

“When Mzee Amos Kaguta and Jjaja Esteri Kokundeka were welcoming the baby boy named Museveni 77 years ago, they did not know that they were giving birth to a global icon, a continental leader, a nationalist and a father of our nation,” Namayanja said. “Whatever we have witnessed, she adds, is testimony of what he has done”.

“I want to thank God who granted wisdom to our President to diagnose the problems of the country and provide the best prescription that has brought us this far. As the country’s vision bearer, Ugandans should be so proud to have him as their president,” Namayanja said.

Referring to Uganda’s dark past before NRM took charge of the country, Namayanja said that Uganda under Museveni has enjoyed uninterrupted leadership and stable growth for 35 years now. She attributed this success to apresident Museveni’s brand character of patience saying that “obugonvu bw’olujegere ge’manyi galwo”, literally meaning the strength of a chain lies in its flexibility.

In a special way, Namayanja thanked the Rt. Hon. Richard Todwong, the NRM party Secretary General who made the day’s celebrations possible, despite his absence due to other engagements. “We want to thank him for his wise leadership,” she said.

The party National Treasurer Amb. Barbara Nekesa Oundo also congratulated President Museveni for making 77 years of youthfulness and promised to support him in steering the development of the country.

“As our President marks 77 years of his youthfulness, we young people who have now crossed to the bracket of senior youth people but lower division, are more than willing to lend a hand to the vision of our President,” Nekesa said amidst chants and ululations from the celebrants.
She said that if Ugandans continue to seek his wise counsel, they will benefit a lot from his experience.

Jaqueline Kyatuhaire, the Deputy National Treasure of the NRM party thanked President Museveni’s parents for the values they inculcated in him that have made him a great leader and a father to this nation.

“As our dear President and party chairman celebrates his birthday, we thank his parents for instilling in him values of good leadership that he has passed on to the society he leads. We only request God to grant him protection and longevity,” Kyatuhaire said.

“What we the women are and what we have achieved is because of President Museveni. This was not possible without him,” Sseninde said referring to the women-dominated high-table.

As the director for mobilization, she requested all able men and women of the country to mobilize for the cross country NRM support to consolidate its strength and continuity.

Also present were Director Finance and Administration, Hajjat Medina Naham, Director Communication Publicity and Public Relations, Hon. Emmanuel Dombo, Commissioner Hon Jane Alisemera and Mr. Barigye Dan Bashiisha, the head of mobilization in the Office of the President, Mr Rogers Mulindwa, the Senior Manager in charge of communications among others.