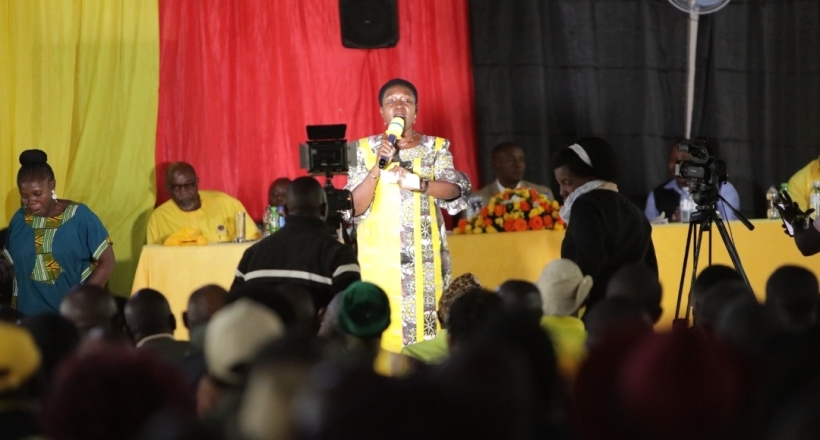 The Director of Mobilisation at the National Resistance Movement (NRM) Secretariat, Hon. Rosemary Nansubuga Seninde has assured Ugandans of government's commitment towards fighting poverty through industrialization and uplifting them out of subsistence production into the money economy through putting in place development initiatives.

Hon.Seninde was Thursday speaking to thousands of NRM candres hailing from the entire Rwenzori region who gathered at Nyabukara Youth Centre in Fort Portal City.

She said that after pacifying the entire Country, the NRM government has shifted its focus to improving the lives of ordinary citizens through free education, medical care and extending financial assistance through projects like the Emyooga and the Parish Development Model (PDM).

Seninde said that Government in its 2022/23 financial Year National Budget will inject over a trillion shillings into the popular PDM project for people to access credit. Every parish out of the 10,000 parishes countrywide shall receive 100million to boost agricultural production and value addition, hence asking the cadres to be vigilant to foil corruption and misappropriation.

"As the government endeavours to provide you with assistance, I discourage you from lamentations and blame games on the Government over widespread poverty.

Don't blame President Museveni for poverty either because his government has track record of fighting poverty through various initiatives, citing programs like Emyooga, Entandikwa, and Prosperity from All but blames their failure on frustration by corrupt and selfish officials," Seninde said.

The NRM's National chief mobilizer said the war on poverty is not only a Government responsibility but should be a shared responsibility to the citizens.

Seninde advised Ugandans to organize, coordinate and work together with the government by forming SACCOs for easy management.

Mr. Richard Rwabuhinga, the Kabarole district Chairman applauded president Yoweri Museveni and his NRM government for the continued support  to  the people of Tooro subregion through various projects like road infrastructure, modern market among others.

He asked the NRM secretariat to empower cadres in enhancing mobilization and sensitization of available initiatives that are aimed at alleviating poverty.

Mr. Patrick Kamulindwa who organized the event praised the NRM Secretary General, Rt.Hon.Richard Todwong and the Secretariat top management for bring sanity and improving relations with party supporters and cadres at all levels.