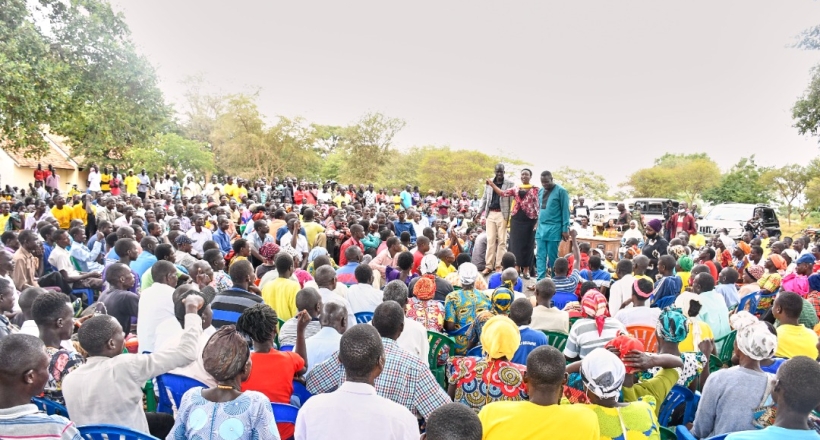 As campaigns for the Gogonyo County by-elections draw closer, the NRM Director for Mobilisation, Hon. Rosemary Seninde, has expressed confidence in her candidate, Derrick Orone, winning the race by a huge margin.

Hon. Seninde made the comments this evening while addressing the media moments after meeting the campaign task force. She said she hinged her confidence on the robust campaign message that addresses the needs of society.

"For us, as NRM, we're very confident and want to re-assure the people of Uganda, particularly the NRM supporters, that when we come to campaign, we don't come to lose, we come to win because we know what we're campaigning for and the kind of message to deliver," Hon Seninde boosted.

During the meeting, the experienced mobilizer rallied the campaign task force to relay their messages based on the party manifesto and its implementation. She argued that since it’s the NRM manifesto being implemented, it only made sense for the community to elect someone who works in tandem with the government.

"We have mobilized and strategized well. We also have confidence that the people will appreciate our message. "It is the NRM government implementing its manifesto. We have made sure that the people understand that electing a candidate that works well with the government will usher in development and improve service delivery to their society," she explained.

On her part, the State Minister for Bunyoro Affairs, Jennifer Namuyangu, noted that the government had extended several projects in the area, which she said was a constant reminder to the people of the good intentions that the party has for them.

"I am here to campaign for the NRM Flag Bearer, Hon. Derrick, with whom we're confident he will be able to steer development in Gogonyo." "I also want to remind the people that we need continuity and people who will work closely with the government and the NRM structures to usher in development," Hon. Namuyangu said.

The NRM Flagbearer will commence his campaign in Gogonyo Sub-county tomorrow.