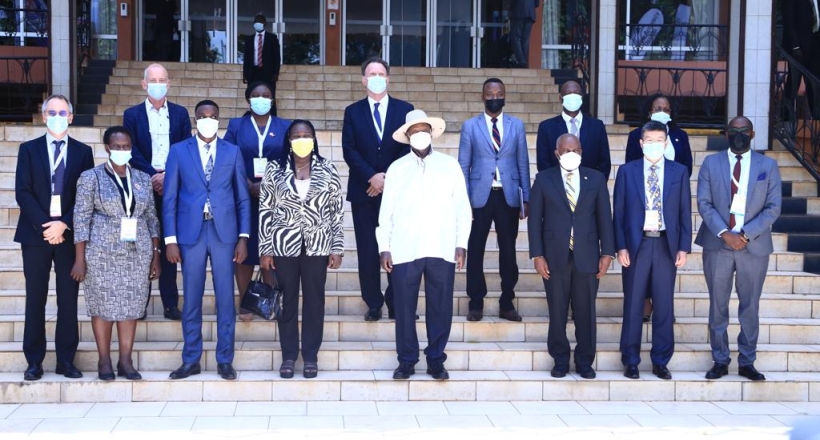 While addressing the 7th Annual Uganda International Oil & Gas Summit (UlOGS) at Serena Hotel in Kampala on the theme: Harnessing Uganda's Investment & Growth; His Excellency the President vowed that plans to build a cross-border export pipeline to carry crude Oil from Uganda's Lake Albert basin to Tanzania's Indian Ocean Coast will not be derailed by criticism from the European Union (EU).

“The main point is that we’re moving forward with our program. The European Parliament has got enough work to do in their own place. I would advise them to spend a bit more time solving the problems of our people there. East Africa has got more capable people who know what to do,” H.E Museveni said.

Recently, the EU parliament passed a resolution that essentially called for the development plan to be changed — including a rerouting of the East African Crude Oil Pipeline (EACOP) — to protect the environment, climate and human rights in Uganda, where two oilfields will be tapped, and Uganda and Tanzania, across which the EACOP will run.

According to the President, although he did not initially support the idea of a pipeline; given the 12.7 American cents that will be charged as tariff transportation for each barrel, East Africa has got numerous energy needs and therefore both a refinery and pipeline will be of great value and urged players in Uganda’s oil and gas sector to support both the refinery to be constructed in Hoima and the East African Crude Oil Pipeline (EACOP).

” That’s why we settled on the idea of both a refinery and a pipeline. So, therefore, I encourage the oil companies to move on the two, on the refinery and on the oil pipeline,” Gen. Museveni said, adding that the European Union should respect the same.

“They should calm down. Because this is a wrong battleground for them. The plan will be implemented according to schedule and I hope our partners join us firmly,” H.E Museveni noted.

It should be noted that the President recently warned Total Energies that if its commitment to the country’s $20 billion oil project begins to waver under pressure from the European Union, he will quickly find a new investor to work with. Gen. Museveni said Uganda will continue to work with Tanzania, not only in the spirit of brotherhood but also other benefits like gas which Uganda will get from there.

“While we have oil here, we don’t have so much gas. Tanzania and Mozambique have got more gas and the Tanzanian government has agreed that the corridor through which the pipeline will pass, can bring a return pipeline to bring gas from either Tanzania or Mozambique for our area here,” H.E Museven said.

Uganda and Tanzania signed an agreement over construction terms for a 1,450 km heated oil export pipeline to Tanzania’s Indian Ocean Port of Tanga. The President also assured the country that electricity tariffs will continue to go down to spur economic growth through industrialization.

“The government power must be preferably 5 cents per unit or not more than 8.16 cents,” Gen. Museveni said, adding that he’s in touch with some groups who are willing to provide even power cheaper to Ugandans.

The Minister for Energy and Mineral Development Hon. Ruth Nankabirwa told members at the summit that having achieved the FID this year for the upstream and EACOP, Uganda is at a point where the projects have significantly matured and are progressing in time for the First Oil in April 2025.

“The summit is therefore very timely. It presents a good opportunity for Uganda to share the current developments in the oil and gas sector together with the energy and mineral sectors including available investment opportunities,” Minister Nankabirwa said.

She said that the expectations from the Oil and Gas sector are enormous and include but are not limited to revenue generation, employment, and infrastructure development, among others.

Minister Nankabirwa further informed the gathering that Uganda is aware of the global push for energy transition and is developing her oil and gas resources with this in mind, calling for patience as countries are not on the same pace of development

“Uganda calls for understanding and patience so that we arrive where countries are now, namely those that are transiting. I hope that we will be given an opportunity to play our part responsibly,” Minister Nankabirwa said, adding that “as a country we’re earnestly pursuing energy integration before we can talk about energy transition”

The two-day summit which is the seventh of its kind, brought together all prospecting oil majors, with representatives from ministers, the petroleum authority, the Uganda National Oil Company (UNOC), lead service providers, contractors and investors among others.