Uganda is the best place to host pharmaceutical companies - Museveni 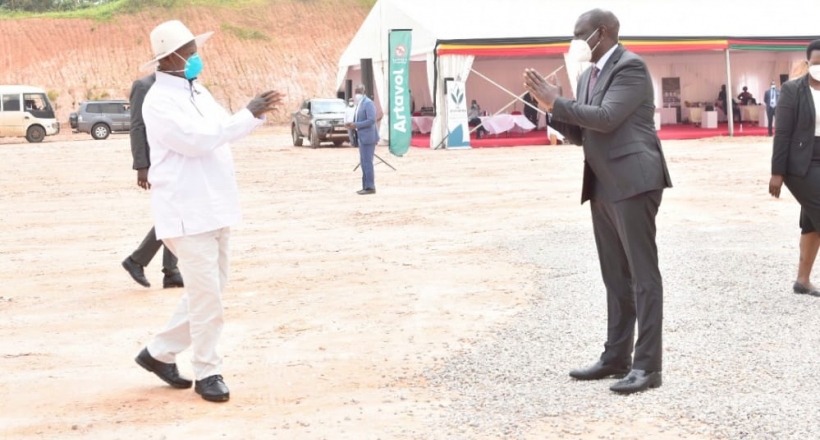 President Yoweri Museveni has said that Uganda is best placed to host pharmaceutical companies because the country is gifted with flora and vegetation that can be exploited to make a wide range of medicines. Mr Museveni argues that Uganda and Africa in general is undergoing a revolution in biodiversity that requires tapping into.

The President was speaking during a function where he layed a foundation stone for a biological drugs and RNA vaccine manufacturing facility in Matuga-Wakiso District.

“Pharmaceutical companies are in the right place here. My role is that I come from the traditional way to introduce you to the modern way and get synthesis. One of our scientist Prof. Ogwang producing something for Corona, it is not his, it’s for the community. There are so many things here. There is a lot of medicine in plants, we are just scratching the surface. This facility is at the right place at the right time,” Mr Museveni stated.

Accompanied by Kenya’s Deputy President, H.E William Ruto, Mr Museveni revealed that Ugandan scientists had finally gotten hold of green monkey cells which are key component in the making of a type of vaccine which was being developed at the virus centre.

He further revealed that because of the race for the manufacture of vaccines, it was becoming increasingly difficult to find the green monkey cells and Ugandan scientists had tried in several countries including South Africa, Morocco and Egypt to no avail. “They had to go somewhere. Other people had taken them and multiplied them. We have them now,” he said.

According to Museveni, it is going to be the first time these cells are being used in a laboratory in Africa to multiply the virus for the vaccines. “This shows you how Africa is sleeping. Africa has got everything but is simply sleeping,” he said.

The President said Africa’s pathogenic economy, which offers huge economic opportunities, is being taken advantage off by others except Africa itself.

“I have been telling you, about what Magoola and Musenero are calling the pathogenic economy. The economy of diseases, germs protozoa etc all those health problems to us are also economic opportunities being taken advantage of by others. Africans are totally absent. That is why we have a shortage of vaccines in the whole of Africa,” he said.

The President is optimistic that Africa will grow and overtake all those groups in a short time.

“China is the second biggest economy in the world now. In the 60s it was very far. Africa is a huge giant but asleep. Thank you very much for waking up people who have been sleeping,” the President said.