Uganda is the best destination for investment- President Museveni woes Investors from UAE. 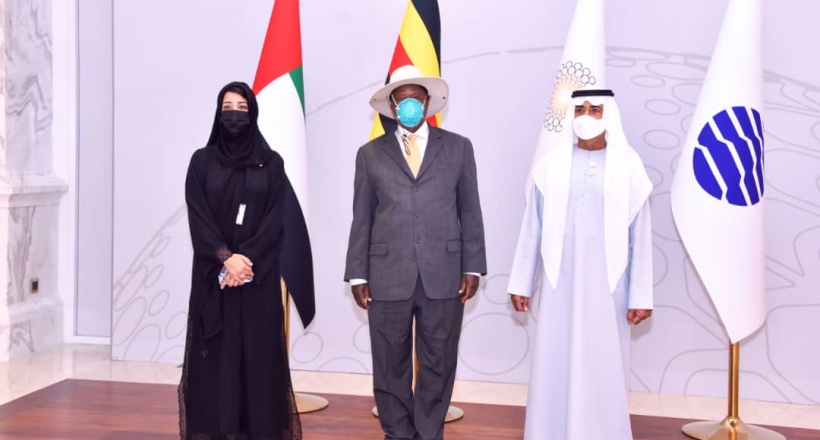 President Yoweri Kaguta Museveni has said that Uganda is one of the best destinations for investment in the world because of the good security, Infrastructure, weather, markets among others.

“You can mobilize the rich people here to come and invest in Uganda mainly in the sectors of Steel production, fertilizers, energy, and Agro-processing” President Museveni said.

While meeting a group of investors from Abu Dhabi Chamber of Commerce, President Museveni expounded on the four areas these groups should interest themselves in.

The areas of investments he said are Steel production, fertilizers, energy and Agro-processing.

For Energy, the president emphasized the need for Hydro energy or wind energy

“We have the raw materials which makes it cheaper for production” The President said.

The First Chairman of the Board of Directors, Abu Dhabi Chamber of commerce, H.E Dr. Ali Saeed bin Aarmal revealed that they have a factory already in Uganda that exports fruits, vegetables, fish etc. to the United Arab Emirates.

He said however, that they will look try to invest also in the sectors suggested to them by the president and pledged to support any potential Ugandan company in UAE.

Others groups were from Abu Dhabi Development Fund, which finances big projects in Infrastructure, Streit Group, the largest company to manufacture Armored vehicles in the world.

Streit Group is currently constructing a factory for armored vehicles in Nakasongola and is expected to start its operations in November this year.

President Museveni said, “Am here to tell you that in Uganda there are potential products, and infrastructure is good and there is a market”.

Apart from the market of 45 million Ugandans, the President said there is a market for the 1.4bn Africans where one can sell their products if they chose to invest in Uganda.

“Then you have the market of USA, European Union and China where we were allowed to sell our products” He added.

According to Ambassador Kibedi Zaake, the Ugandan Ambassador to the UAE, says that the Economic cooperation between Uganda and UAE has grown over the time.

The President invited these groups to visit Uganda and have more details for their intended investments.