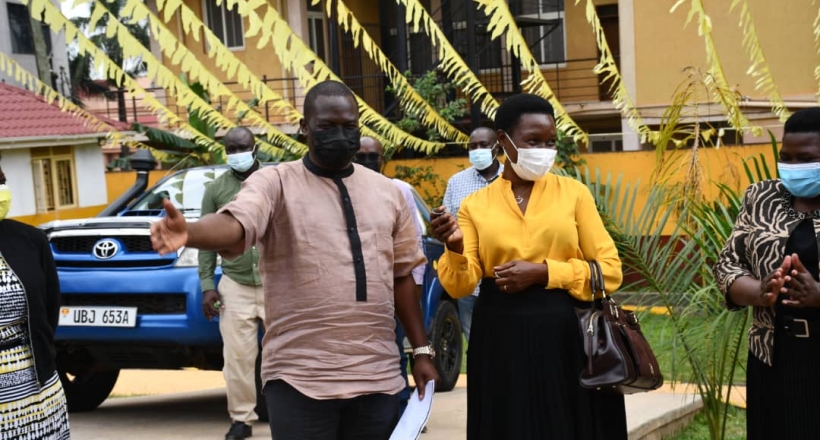 Hon Sseninde was appointed to the position last week and she replaces the late Hon Mathias Kasamba who passed on in May.

At a ceremony attended by the NRM Deputy Secretary general Hon Rose Namayanja Nsereko and the Deputy Treasurer Hon. Jacqueline Kyatuhaire, Hon Sseninde was given an official car and shown her new office.

In her remarks, Sseninde said it was by the Grace of God that she is now the NRM Director of Mobilisation, “I thank the President who selected me to serve the NRM party in this capacity as Director of Mobilisation. Because the NRM is the party in government, this is an opportunity for me to serve the country. Together with my colleagues at the secretariat I will do all my best to serve," she said.

She attributed the growing youth population in the country to the the achievements of the NRM among which she sited immunisation of children and putting in place a good health care system, something she says has decreased the infant mortality in the country.

“The NRM government has educated the children through UPE, USE and other tertiary institutions with this you find the number of youth coming from these institutions is high. And while the jobs available do not match the numbers of those graduating, we will work to addressing the grievances of the youth, she said, adding: “These are some of the issues we shall work together to ensure that we mobilize them and they come to appreciate the tireless efforts of the NRM party and also avail a conducive environment for them to create their own jobs.”

Hon Sseninde, who is former Woman MP for Wakiso District, underscored that the opposition rides on the issues affecting the youth to downplay the numerous achievements of the government. “We are aware and have tried to address some of these issues that affect the youth. I have been in Parliament for 20 years and and so I understand and appreciate most of the challenges the youth are facing and with this new responsibility, I will ensure that most of these challenges are addressed,” she said.

She stated that the party would address the issues that caused the dismal performance in Central Uganda. “I am not going to do this alone because we are going to work as a team. There are issues for which we shall seek the President’s guidance on how to handle.”

She also stated that the losses in Central Uganda are not alarming. She said the FDC party have in the past created waves of change in some parts of the country but with proper planning, the party returned those areas to its fold.