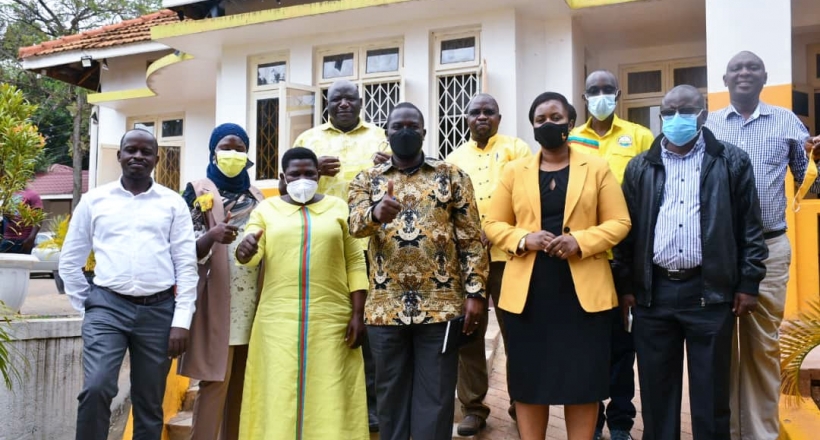 The National Resistance Movement (NRM)  Secretary General Rt Hon Richard Todwong has said that the new team at the National Secretariat will encourage transparency and openness while executing party activities.

“We are all servants of the party. a cordial relationship and mutual understanding with one other is key. We are going to continue respecting one another but also allow offices to work independently to help achieve  the overall goal for all stakeholders” Todwong said.

Hon.Todwong said that working as a team will help the secretariat deliver up to the expectations of the national party chairman, Gen Yoweri Museveni and the people of Uganda.

“We promised all staff better welfare whereas the party offices are going to be open to our esteemed partners. Our mandates are not keep at the secretariat but be more in the field,” he said.

Nekesa who has been Uganda’s high commissioner in the republic of South Africa and six other countries in the Southern Africa since 2017 was appointed by the party chairman, Yoweri Kaguta Museveni as the new party treasurer.

Nekesa applauded the party chairman for appointing her in the new position but also  pledged humility.

“I have humbly served my party and country at various capacities with humility and this is the specialty that I bring to the party,”  Amb Nekessa said.

She congratulated her predecessor for the new appointment as the party Deputy Secretary General and pledged to work with everyone while executing her duties.

On her part, Hon Rose Namayanja welcomed the new party treasurer to the  winning team at the secretariat.

She applauded God for helping her to serve in the capacity as the National Treasurer for the past six years, a journey she described as being fruitful, rewarding, learning and one of  new experiences.

She thanked the entire NRM leadership and the staff for providing a conducive working environment that she said has laid foundation for many successes for the party.

Hon Namayanja called for cohesion at the secretariat that she said is the foundation of more success for the party.
She later handed over the instruments of power for the office of the National treasurer to the new office bearer.