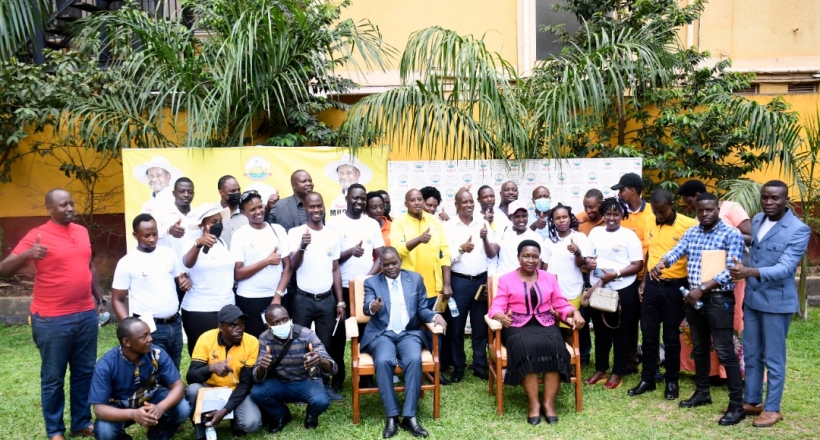 A team of senior Leaders at the National Resistance Movement secretariat led by Director mobilization, Rosemary Nansubuga Seninde, and the Director in charge of External Affairs, Maj (Rtd) Awich Pollar today Friday held a resourceful interaction with a delegation of supporters who work or live in the United Arab Emirates under their NRM-UAE Chapter formation.

Hon. Seninde welcomed the group and committed to the NRM’s willingness and desire to formally work with the Chapter through its diaspora office to enhance cadre identification, mobilization, and recruitment.

“We want to appreciate the NRM diaspora family which voluntarily mobilizes and defends the ruling party amidst the lies and propaganda of the opposition. We pledge to work together to expand our bases and support outside our borders,” Hon. Seninde said.

She noted that the NRM leadership will seek engagements with the Ministry of Gender and other concerned stakeholders in a bid to streamline the external labor market and mechanisms on how to improve the safety of Ugandan citizens living or working in the middle east.

“We have noted several issues affecting our citizens and we promise to engage relevant authorities to ensure the hustle outside our borders is attractive,” Mrs.Seninde noted.

The Director of Diaspora Affairs at the NRM Secretariat, Maj. Awich Pollar said the party has already traversed several countries where Ugandans work or live to establish their safety conditions but also discuss with them how well they can contribute to the growth and development of their motherland.

“The country is proud of all citizens working in other countries because your contributions through remittances have fostered economic growth and development,” Maj. Awich said, noting that the government is working out a formula through which the two million Ugandans outside can vote for leaders of their choice in the next general election.

Mr. Akusiima Kenneth, on behalf of the association, asked the NRM leadership to consider arranging symposiums and conferences for its supporters to train and pass on relevant information about the party.

He asked the government to tighten regulations on some labor firms that mistreat Ugandans and some end up dying.