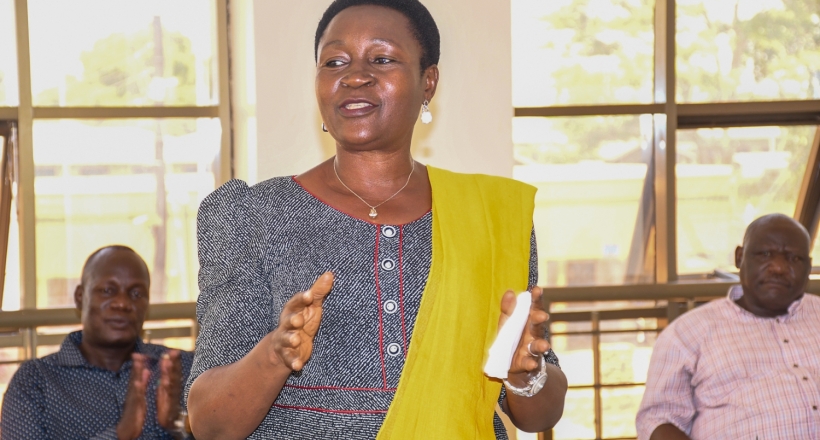 The Director for Mobilization at the National Resistance Movement (NRM) secretariat, Hon Rosemary Nansubuga Seninde has lashed at some elements of the opposition over what she called a smear campaign against the government that it used money meant for compensating war debt claimants to facilitate Mr Andrew Ojok Oulanyah in the ongoing Omoro by-election.

Seniinde dismissed the propaganda saying the government has already released the compensation money but has only been delayed by the verification exercise being carried out by the Attorney general’s office.

“I have heard defamatory claims from some people that Andrew Ojok is being facilitated by the government using money meant for compensation of your lost property during the war, that is an absolute lie and there is no truth in such rumours.

Government is aware of war claimants and the opposition should not confuse you. What is holding it is verification of claimants through the Attorney general’s office which is underway within your areas,” Seninde said today as she addressed a strategy meeting with NRM district caucus leaders for Omoro district in Lalogi sub-county ahead of Thursday's nomination to fill the Omoro county seat.

She called upon caucus members who were led by Omoro district local council chairman, Mr Okello Peter Douglas to counter such a narrative by going out to villages to tell people the truth and expose lies of the opposition.

Mr Okello Peter Douglas asked fellow leaders to sacrifice time and hit villages to canvas support for Mr Ojok. “We need to come out and help our party by harbouring the existing misunderstandings and unite together to achieve a common goal of victory in the forthcoming by-election.”

Hon Emmanuel Dombo, the director in charge of information and public relations reiterated Seninde’s message on opposition elements saying, “They have come
to deliver on nothing to you but to ride on lies and unfounded concoctions to disorganize you. Let us provide leadership to the local people who may not easily understand their tricks.”

Dombo also emphasized it is they had elected NRM for five years, requesting that its flag bearer (Ojok) should be supported and voted to complete the term.

“You the people of Omoro County gave five years through Jacob Oulanyah who was our candidate. So let us replace our “injured player” with someone from our party,” Dombo appealed to the caucus members as he asks them to actively engage in campaigning for Ojok.

The Director for Finance and Administration, Hajjat Medina Naham applauded the leaders for their commitment so far showed and assured them of the secretariat’s technical support throughout the campaign process.