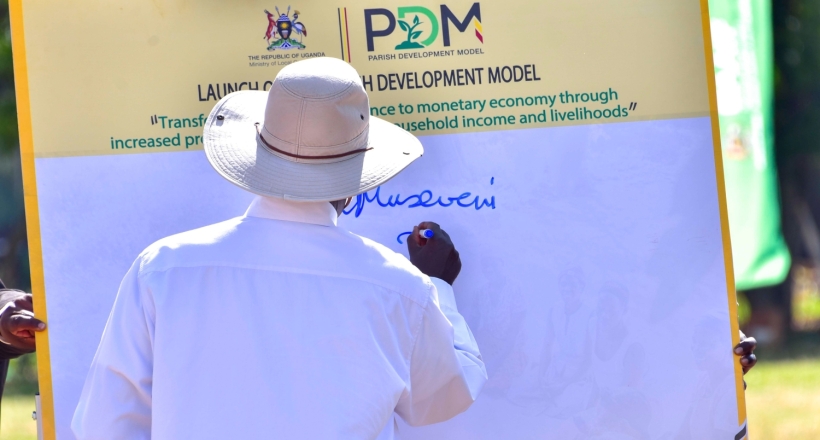 On arrival at Kibuku Primary School grounds at midday, he was received by Vice President, H.E Maj. Jesca Alupo, Prime Minister, Rt. Hon. Robinah Nabbanja, Ministers and Services Chiefs among others. The President thereafter inspected the agricultural exhibition before joining other invited guests for the colourful function.

PDM aims at helping people from parish level to increase on their household incomes and joining the money economy.

Speaking at the launch, President Museveni, who narrated the journey of the country’s transformation, said that under the leadership of NRM, a foundation for socio-economic transformation has been laid by securing the entire country, building roads, hospitals, schools, water sources, dams to generate electricity and other public services.

“During the recently concluded elections, we promised you that the 2021-2026 term is going to be a Kisanja for creating wealth, jobs and incomes for all Ugandans,” the President said.

In the 2021-2026 Manifesto, the President said, NRM promised to use the (PDM) as a strategy to reach homesteads that are still in subsistence economy to support them join the money economy.

“These guidelines, therefore, have been prepared to direct the implementation of this transformative intervention,” he said.

He used the function to appeal to all leaders- political, religious, cultural, etc- to join hands with Government to sensitize the communities and promote PDM.

“The efforts now should be sensitizing our people how and who to do what. Because we don’t want our people to do what won’t help them.”

Museveni said that the main focus now is the transformation of the population from the culture of working for only the stomach to working for both the stomach and money. He added: “We must do so with a calculation (ekibalo)”.

He asked leaders at different levels to educate the people on the problem and danger of land fragmentation. “This one is very dangerous. All political leaders, religious and cultural leaders should join this effort and tell our people to stop land fragmentation,” the President emphasized.

Through PDM, the President said, Government will take services to the people in a more effective way and receive actionable feedback from them on wealth creation and Government-provided services to quicken socio-economic transformation.

The President added that NRM has identified four sectors for wealth and job creation which the PDM will advance. These are Commercial Agriculture, Industry, Services and Information, Communication technology (ICT).

“The implementation of these sectors is going to enable us achieve Middle Income Status at a much faster pace, despite the Covid-19 pandemic that slowed down the economic growth,” Museveni said.

The President said that the Parish Chief is going to be the coordinator of all Government efforts at each of the 10,594 parishes and will report to the Sub-County Chief. Each Parish, he added, will have a cooperative society through which Government support will be channeled.

“I urge leaders at all levels to support the implementation of this intervention. What we are launching here is a strategy which has got two packages of medicines i.e. to our people with both big and small pieces of land,” President Museveni emphasized.

The PDM is a multi-sectoral strategy to create socio-economic transformation by moving 39% households out of subsistence economy into the money economy using the Parish as the epicenter for development.

It emphasizes the approach of ensuring increased production, processing and marketing, infrastructure and service delivery at grass roots. The Model is designed under seven pillars which include Production, Storage, Processing and Marketing; Infrastructure and Economic Services; Financial Inclusion; Social Services; Mindset change; Parish- Based Management Information System; Governance and Administration.

In her address, Vice President Alupo said that this was a historical ceremony and a milestone in the Government’s efforts for socio-economic transformation of Ugandans.

“This historical ceremony is yet another very important milestone. It reminds us that all of us Ugandans should join you Your Excellency to know that we have a right and responsibility to develop our country and all leaders have a duty to remind their people of this,” Alupo said.

Prime Minister Nabbanja welcomed the President to Kibuku district and revealed that in the last few weeks, her team has been traversing the whole Bukedi region pre-sensitizing the population on the PDM and household income.

“Thank you for the wise counsel to the team that has enabled us sensitize the communities. We are lucky to have you, Your Excellency, and I appeal to all Ugandans to continue supporting you,” Nabbanja said.

She commended the President for promoting peace and stability in Uganda saying that Ugandans now go well about their businesses because of this peace.

“The road network has greatly improved. You can now travel from North to West, East and Central with tarmac roads all through.”

The only challenge, Nabbanja noted, is now poverty but added that with the PDM this is soon becoming history.

The Minister of Local Government, the line Ministry, Hon. Rafael Magyezi, commended the President for presiding over the launch of a game changer programme, He said PDM will see the population create more wealth and jobs.

“Thank you, Your Excellency, for finding time to preside over the official launch of the Parish Development Model. You have since given us guidance and directions on this programme,” Magyezi said.

He said that the PDM is a National Development Programme 111 implementation mechanism by both the state and non-state actors to achieve inclusive development in a coordinated and participatory manner.

“It is commitment of government, as contained in the National Resistance Movement (NRM) Manifesto 2021-2026, to address the question of creating wealth and jobs for the people,” Hon. Magyezi said.

Minister Magyezi revealed that they will start with giving out Shs17million Parish this financial year and added that the Shs100 million is planned for in the next financial year (per Parish).

The Chairperson LCV for Kibuku District who spoke on behalf of the seven districts of Bukedi, Mr. Nakeba Muhammed, said that the sub-region has a conviction that this programme will succeed and transform lives of the people of Bukedi in particular and Uganda in general.

“We have a conviction that this programme will transform our people. We thank the NRM government for the many programmes that aim at improving the social and economic welfare of the citizens,” Nakeba said.

He commended the President for his wise leadership.

“Thank you for selecting a good team to spearhead this programme. It’s now our duty as Bukedi to see to it that this programme succeeds.”