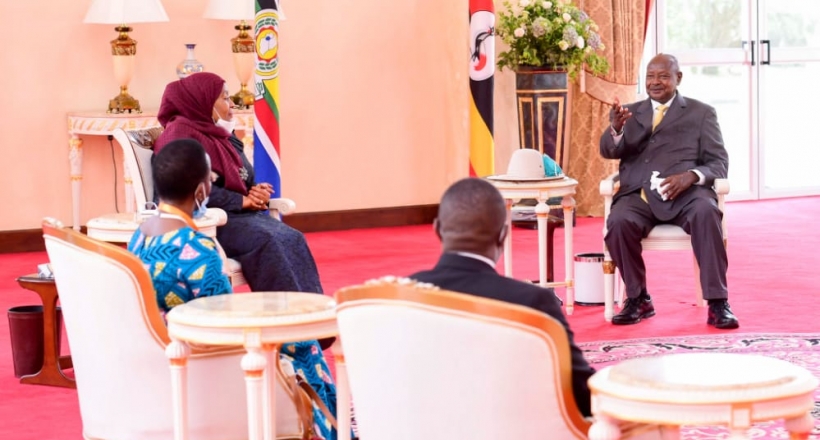 President Yoweri Museveni and his Tanzanian counterpart, Samia Suluhu Hassan have witnessed the signing ceremony for the East African Oil Pipeline (EACOP) project between the Ugandan government, Tanzania and oil companies including Total E &P and CNOOC.
After the signing ceremony at State House Entebbe, President Museveni said the pipeline will be of benefit not to only Uganda but also her neighbours.

"This pipeline project can be a core of bigger developments if the brothers in Congo-Kinshasa and South Sudan choose to also use it for their oil. This pipeline could turn out to be a very important project that may serve the region, not only in the short term but also in the medium, if not in the long-term,” President Museveni said.

“Besides, the same corridor, can take a return gas pipeline, supplying Tanzanian and Mozambiquan gas to Uganda and the Great Lakes’ region.”
The president also applauded his Tanzanian counterpart, Her Excellency Samia Hassan for accepting to attend the signing ceremony that was postponed from last month.

On her part, Tanzania's Samia Hassan expressed honour in witnessing the signing of the pipeline project which will run from Hoima in Uganda to Tanga point in Tanzania, making it the longest oil pipeline project in the world.

She added that the project will have immense impact on social economic development of both nations.

President Hassan said the project will create more than 10,000 jobs for professionals, skilled as well as semi skilled East Africans especially the youth. She also stated that the project will stimulate trade in the region, attract investments as well as strategic cooperation between Uganda and Tanzania.