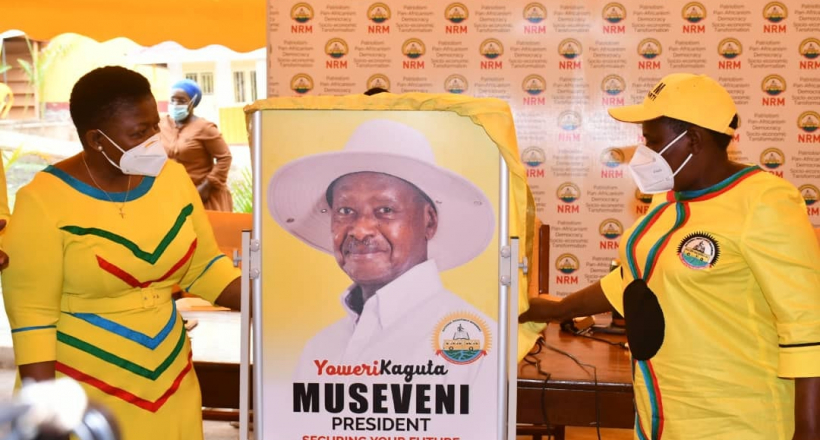 The National Resistance Movement (NRM) has today unveiled the official campaign portrait of its presidential candidate, Yoweri Kaguta Museveni ahead of the general elections scheduled for January 2021.

The Party Secretary-General, Rt.Hon. Justine Kasule Lumumba while addressing the press at the Party Head offices in Kampala, said that the forthcoming campaigns shall be run under the theme, "Securing the Future" which is best explained under the four core principles of the NRM i.e. Patriotism, Pan Africanism, Socio-economic transformation and Democracy.

“As NRM, we would like to unveil to Ugandans the official portrait of our Presidential candidate for the 2021 general elections,” Hon. Lumumba revealed.

When asked about the missing name 'Tibuhaburwa' on the portrait of the candidate, the Secretary-General responded that as soon as the due process of upholding name by Electoral commission is done, his new name shall be adopted.

On the same event, Lumumba disclosed to the media that the Party shall present its Presidential candidate to the independent electoral commission for nomination on the 2nd of November this year.

The SG also noted that the party had submitted a total of 5 million signatures to the National Electoral Commission for the verification in accordance with the legal regime obtaining in the country.

"I want to thank the NRM fraternity for the strong show of support. I also want to inform our sister political parties that this is a clear signal for the 2021 national elections," she said.

She extended appreciations to the Party National Chairman for his commitment and continued hard work in ensuring funds are availed to sponsor all party activities including those completed and those yet to come.

Lumumba congratulated all the NRM flagbearers upon their successful nomination by the Independent Electoral Commission. She also in a special way, congratulated all the flagbearers who were declared unopposed. These include; Papalu Lilian Obiale,(Arua District Woman Representative), Lakwang Hilliary (Ik County Kaabong), Wakabi Pius, (Bugahya county-Hoima ), Kugoza Emely (Buyanja East in Kibaale), Enock Nyonyore (Nakaseke North in Nakaseke) and Gyavira Ssemwanga for Buyamba in Rakai District.

"To the party, this is a clear indication of the massive support that the party enjoys among the Ugandan population. It shows trust and confidence that Ugandans have in us," Lumumba added.

She announced that the Party with effective next week shall embark on a nationwide reconciliation tour in a bid to bring party members who were aggrieved over the September primaries back to the fold.