NRM shall survive through cadre development not sloganeering - Otafiire 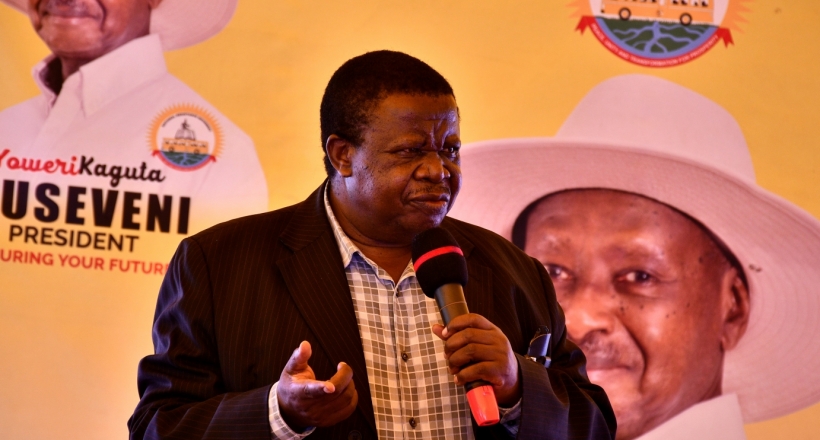 The current minister for Internal Affairs was on Thursday speaking during the weekly ideological clinic lectures at the party headquarters at Plot 10 Kyadondo road where he urged the party stakeholders to upscale cadre development to raise numbers to ensure a strong support base.

“We need to ensure cadre development and ideological teaching, not sloganeering for the sustainability of the party. When a political party lacks clear-headed ideology, that party is a house built on sand. That’s not the NRM we want to leave behind,” Otafiire said.

Discussing the topic “NRM’s mission and its revolutionary methods of work: 'A Historical perspective and the Millennium challenge”, the former NRA National Political Commissar said the National Resistance Movement was built on democracy, patriotism and Pan Africanism, a strong foundation that has enabled it to stand the test of time.

Otafiire urged the current crop of party leaders to interest themselves in understanding the scientific laws that govern societies to avoid mistakes that cost the party its mass support but also advised the leaders to take up mistakes and seek for the solutions.

“As a leader you must know the iron laws governing societies because these societies are sophisticated and evolve overtime. We know mistakes are inevitable, but when you make a mistake accept criticism and when the mistake is enormous accept shame,” Otafiire said.

“Avoiding formation of cliques due to misunderstandings”, he said, adding that resolving contradictions amicably is the best solution to consolidate the party support and unity.

“Emergence of factions not based on legitimate concerns is affecting the NRM party. The party should go back to a pro-people party that it was. Contradictions can be resolved by mediation and roundtable talks because differences in opinions are normal but forming cliques is dangerous,” He stressed.

“In unity you have strength,” he points, “You need to work with people to be successful. That's why NRM is such a successful party till now.” Otafiire advised.

While giving his remarks, the NRM Secretary General, Hon Richard Todwong said the NRM ideological clinics are meant to remind the party members about the promises made to Ugandans.

“The NRM party was losing focus and therefore the need for the ideological clinics,” he said.

The ideological lectures are held every Thursday evening between 4-6pm at the party headquarters.

The sessions, which are also aired live on social media platforms of zoom, Facebook and the party YouTube channel, feature various guests in government and from the academia.nr