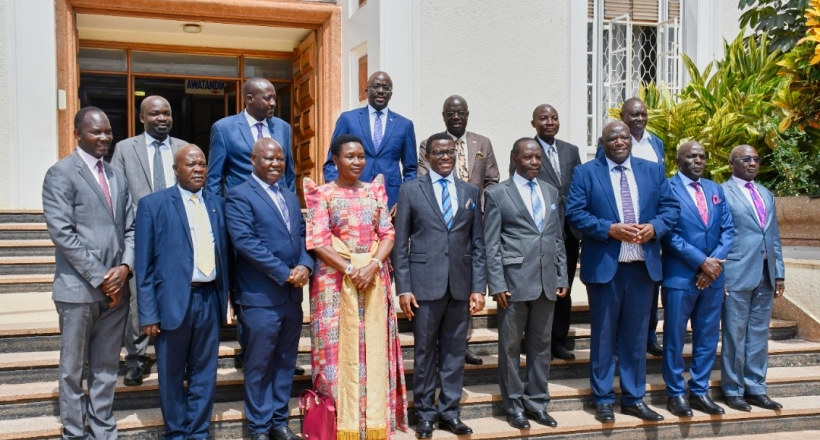 Senior officials of the ruling National Resistance Movement (NRM) party have commended the Kingdom of Buganda for its tremendous contribution towards the wellbeing of Ugandans and the development of the country at large.

The officials from the NRM secretariat, who included the director of mobilization, Hon. Rosemary Nansubuga Seninde, and her entourage, made the remarks today, Tuesday, while visiting the Katikkiro of Buganda, Owek. Charles Peter Mayiga, at Bulange, Mengo.

"As NRM, we are grateful to you for your deliberate efforts to improve the lives of the ordinary people through projects in agriculture, especially coffee growing, education, and health, among others," Seninde said while addressing the Katikkiro and his cabinet, including the Speaker of Buganda Lukkiko, Owek. Patrick Luwagga.

She also applauded the Kingdom officials for uniting all people, irrespective of political affiliation. "I am humbled by your gesture of welcoming and consolidating our people across all political divides and religions."

She however called upon the Kingdom to cooperate with the NRM party and government in finding a lasting solution to the prevailing critical issues like unemployment among the youth and land eviction, which are rampant in the Buganda region.

Owek. Mayiga, who was glad to welcome NRM senior leaders, pledged his full support in collaborating with the government to implement policies that are in the interest of those still living in poverty.

"We campaign on issues concerning the welfare of ordinary people. "We therefore ask the government to also support our initiatives since we are working toward the same objectives of uplifting the lives of our people," Mayiga said.

The Katikkiro reminded the NRM party of their responsibility to protect the rights of all people.

"This was the cardinal principle for which government came into power for 37 years." He says the reason why the people of Buganda supported the NRM in the liberation struggle was because those who were there before them violated human rights.

He also advised those in authority to punish perpetuators of wrongs against fellow citizens, wondering why people should commit crimes in broad daylight and walk away scot-free.

Hon. Emmanuel Dombo, director of communication, praised the Kingdom officials for establishing CBS radio stations and BBS Telefayina, saying these have been instrumental in sensitizing locals about government programs.