New MPs resolve to work with Museveni in transforming Uganda 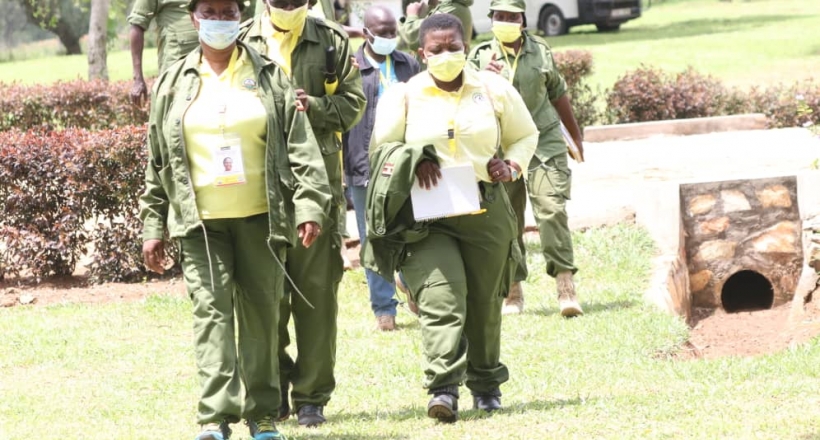 The newly elected Members of Parliament that subscribe to the ruling NRM  party have unanimously passed several  resolutions to support President Museveni and his government in the next five years.

On behalf of the MPs aligned to the NRM party, Ngora  County Member of Parliament Juliet Achaye Ludou  read the following resolutions to President Museveni.

Ideology and leadership
The MPs saluted the leader of the revolution, Gen Yoweri Kaguta Museveni, for his visionary, valiant and committed leadership to the people of Uganda in their struggles against dictatorship and backwardness, in promoting democratic principles, practices and transformative leadership for over five decades;

They pledged to affirm their commitment in supporting and promoting the principles of the NRM which include Patriotism, Pan Africanism, Socio-economic Transformation and Democracy in securing Africa's strategic security;
To promote our Ideological understanding and inculcate the same values to the NRM structures and leaders, our constituents and the people of Uganda.

To exercise our Legislative powers in supporting the President in checking government programs, or are proven to be falling short of their expectations.

To recommend for lower leaders a decentralized Ideological zonal program managed by the NRM Secretariat.

To strongly recommend opposition leaders at national level to also receive Ideological discourse at NALI in order to prevent them from being inhibitors of Progress.

MPs told Museveni that they will fully support the vigorous implementation of the National Development Plan (NDP) III within the framework of Uganda Vision 2040, as a firm foundation for "Take - off";

To fully support the restoration of Cooperative Unions that will enhance production and earnings by Ugandans, through eliminating unscrupulous middlemen;

To fully Support development of Zonal Common-user/ skilling facilities in mobilizing the youth and empowering them into gainful employment and profitable production.

To support H.E the President, to urgently hold a conference of indigenous fishermen in guiding them to engage in acceptable, viable and profitable fishing practices as an avenue to finding lasting solutions of the vagaries affecting the fishing industry and the fishing communities ;

To support the construction of roads in the Eastern region of the DRC, as part of the bilateral cooperation and any other such programs that promote East African integration;
To improve inter-District roads to facilitate trade and social interaction within the regions.

The Education and Sports Sector
To fully support government in implementation of free education by enforcing the complete elimination of all manner of fees.
To urge Government to provide a minimally decent meal (possibly porridge, half a litre of milk and an egg per leaner) as a means of mitigating absenteeism and the attendant school dropout rates that continue to curtail government development goals in the sector.

To fully support the utilisation of media platforms that cover the entire country in communicating Government policy and programs. We commit to travel to our constituencies to communicate to our constituents, at least once a month using the said platforms in coordination with the Ministry of Information Communication and Technology and National Guidance (ICT/NC) and other supportive structures like the RDCs.

To fully support multi-skill engagements in wholistically embracing the media, including but not limited to digital platforms that must be sparingly used especially in one's free time.

The NRM manifesto  2021/2026
a. To fully support the robust implementation of the provisions of the Manifesto and the Mobilization of our communities in raising their household incomes, as the basis of social-economic transformation for wealth and job creation.

To promote the development of industries engaged in profitable commercial agriculture and value addition, as a means to providing local markets for our produce and products, thus supporting the country's economic development.

To strongly support the implementation of recommendations of the Bamugemereire Land Commission as adopted by government.

Health sector
To continue to support H.E the President in his continued efforts in the fight against the Covid-19 Pandemic;

To hail and warmly appreciate our medical workers who have been at the frontline of the fight against the Covid-19 pandemic.
To hail and strongly support our valiant Ugandan Scientists who have been working around the clock in developing vaccine against Covid-19, the diagnostics and treatment of the disease.
To Promote and strengthen physical education and dietary modifications in order to emphasize preventative health to avoid lifestyle diseases.

Parish model
a. To support the implementation and operationalization of the Parish Model as a strategy to attain improved food security and household incomes.

To sensitize our people in appreciating the need to differentiate the distinction between intensive and extensive farming to guide them in making informed decisions.

While delivering his speech, President Museveni, who is also the NRM chairman asked the newly elected MPs to support his ideas while in Parliament.

“We have got a lot of delays by Parliament.  This must stop and everybody should play their part. I am here in two capacities, one as the president-elect repeatedly by the people but also as the leader of the resistance movement. I have capacity to say no,” he said.

The NRM national chairman said there are many projects like the Shs22 billion anti-tick vaccine being developed by a team from Makerere University led by Dr Margaret Saimo-Kahwa and the Nyaruzinga banana project that he said have failed to take off because Parliament has not provided money for them.

He said that in the forthcoming Parliament, NRM MPs should support such ideas that benefit the country , other than refusing to fund them.
"Other people want to take away these projects.  We can’t have leaders who don’t know what they want," he said.

The president urged the new NRM MPs to help their electorates get out of poverty.
"This place is a bush but people are richer than those in towns. Each one of you must help change the areas they come from. Peasants must disappear. There must be no more working for the stomach," Museveni said.

"We need peace in the country and you must get very firm against trouble makers who want demonstrations. You must be logically against them so they don’t disturb our people."

Earlier, the NRM Secretary General Rt, Hon. Justine Kasule congratulated all MPs upon being elected to represent their People further thanking them for successfully completing the 3-week long retreat. She was however quick to remind them the task that lies ahead of them in serving their voters in order to improve their standards of living.

"The responsibility as a party is to improve the livelihoods of Ugandans. Therefore go out there and serve our people" she cautioned them.
Lumumba also heaped praise on the Party National Chairman H.E Gen Museveni under whose visionary leadership, she said, the country has transformed.

"I congratulate you for being re-elected by majority of Ugandans to lead this country for the next five years. As national chairman thank you for providing ideological clarity as the leader of the party which leads us to success,"  Lumumba said.