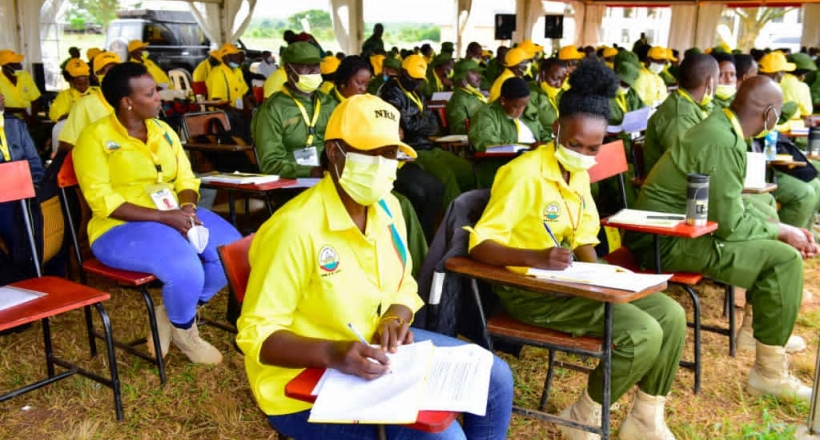 President Museveni has said that the government will implement the Bamugemereire  land commission Report once it is well studied and approved by the next Cabinet.

Museveni, who was speaking to NRM MPs- Elect in Kyankwanzi yesterday shortly after Justice Bamugemereire 's presentation into land matters, said that the new Cabinet will study the report and write a white paper in response to the report.
Thereafter, the report shall be taken back to the public to feed in their views before implementation.

According to Museveni, the report, once implemented, shall cure both current and historical land problems which have existed since the colonial era citing the mailo land  that the british gave to chiefs and their collaborators  in areas of Buganda and Bunyoro.

" I think, this report shall help us to dismantle the old and barbaric laws that for long have hard-pressed our people, please help me to stabilize the situation once and for all," Museveni asked the new MPs.

The President also decried the increasing land fragmentation that has been a common practice in areas of Kigezi, Rwenzori, Mbale, Busoga among others where people have continuously divided land into tiny pieces.

He blamed some of the NRM leaders who give a deaf ear to the advice of government against this vice.

Museveni says that MPs should continuously educate locals against this practice and instead teach them how to share any available  land with out dividing it.

Justice Bamugemereire in her presentation said the commission has prescribed remedial measures to address the problems afflicting the systems of land administration, management, acquisition, and registration and land dispute resolution in Uganda.

The Commission among other things wants government to addresses the challenge of the perceived subservient position of customary land by ensuring that all land including customary land is registered.

“All land in the country should be put on a register after an adjudication process,” Bamugemereire said.

The Commission also recommends the establishment of an institutional framework for administration of customary land within Uganda Land Services Bureau framework.

The Land dispute situation, according to Bamugemereire was found by the commission to be a pandemic, in which mostly the well-to do persons have obtained land through illegal means, bribing their way through all systems of land administration and registration.