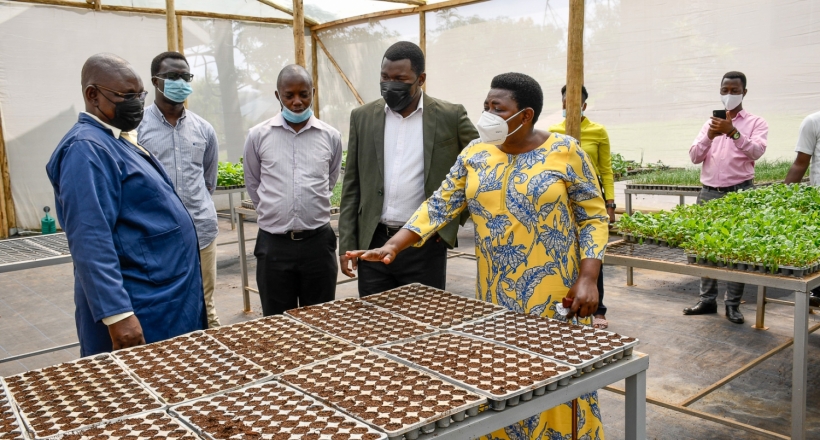 The NRM Deputy Secretary Hon Rose Namayanja Nsereko has paid a courtesy call at the KCCA Demonstration farm in Kyanja.

Namayanja together with her delegation were taken through a guided tour by Godfrey Mwesigwa Kamugisa the Supervisor in charge of animal production and fisheries at the farm where they visited several projects including the green houses, poultry units and demonstration gardens.

The Deputy Secretary General applauded the KCCA team at the farm for creating the initiative that the public can access and obtain knowledge for their own benefit.

"With the mushrooming cities and town councils this is the way to go because government has availed these initiatives for people to fight poverty," she said.

Godfrey Mwesigwa Kamugisa explained that  the demonstration farm has hosted almost the entire country and people have started setting up mini demonstration farms in their localities with the knowledge acquired.

"We are here to serve Ugandans and  educate them on how to start small because it's one of our objectives."

According to the deputy NRM Secretary General, the team at the party is willing to visit this demonstration farm  to learn a thing or two.

"We are going to have a series of visits to this farm to ensure that our people come and learn because later they will buy your seedlings to start up something in their localities."
“As a commercial poultry farmer, with this knowledge, I am going to persuade my neighbours to start up something because majority of the projects here are relatively cheaper and local farmers can easily venture into them.”