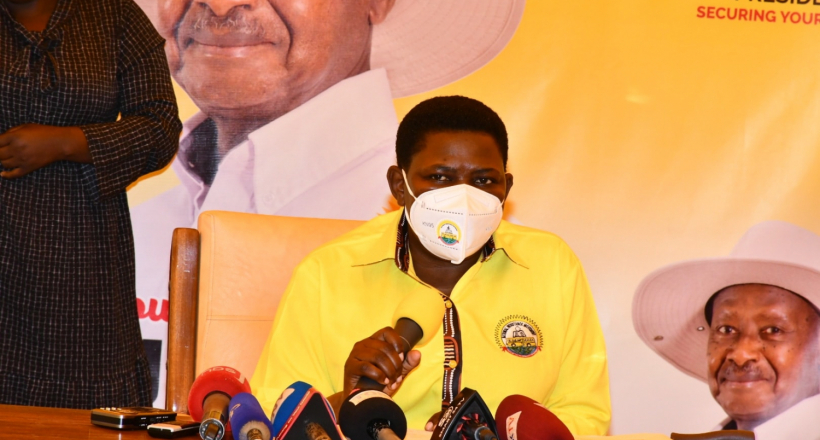 The NRM National Treasurer Hon Namayanja Rose Nsereko has this Sunday morning addressed the media at the Party head offices in Kampala about the ongoing and forthcoming activities.

Hon Namayanja informed the country that the Party Secretariat leadership on Wednesday October 21, 2020 dispatched teams to embark on a nationwide reconciliation tour and pre-presidential nomination meetings in a bid to bring party members who were aggrieved over the September primaries back to the fold, and also lay ground for the nomination and mobilisation for the NRM Presidential flagbearer Yoweri Kaguta Museveni.

Namayanja intimated to the media that in most parts of the country, the reconciliation meetings have been a success, and hope to wind up the exercise by Wednesday next week.

“Am happy to let you know that we have already achieved some degree of success, even in areas where we expected stiff resistance. Some of the Independents have pulled out to back the official flag-bearers especially at parliamentary and Local Government level. This is a good start for the party ahead of the general elections,” Namayanja said.

She commended the NRM fraternity and the party structures for the strong support and unity during these ongoing meetings, saying this is what the party needs to consolidate support and achieve its strategic mission.

On the Nomination of the NRM Presidential Flagbearer HE Yoweri Kaguta Museveni, Hon Namayanja informed  the media that the party will on Monday November 2, 2020 present its presidential candidate and flag-bearer to the Independent Electoral commission at the designated venue- Kyambogo University playground  for nomination at 10am.

She also noted that, thereafter, the candidate shall launch the new Party Manifesto for the next five years under the theme "Securing your future."

“As a Party, we are set to nominate our most formidable and winning Candidate who will secure the country to the desired future. General Museveni has demonstrated, since time immemorial, that he is the man of the moment; as the chief strategist, theoretician and guide of our Revolution, Museveni has registered milestones that very few leaders would achieve given the condition under which he picked this country.”

The Treasurer, however, expressed dismay over NRM flag bearers and supporters flouting the COVID-19 Standard Operating Procedures (SOPs) instituted by Ministry of Health.

"I appeal to all NRM members to avoid any form of rallies, and if it is very necessary should strictly ensure SOPs are strictly adhered to," she emphasised.

Namayanja advised the Party members to opt for other forms of campaigning including organising small meetings, foot-soldiering and other forms of media.

Elaborating on the sticky issue of Independents, Namayanja emphasized that the party will only offer support to the flag bears despite having independents who are NRM-leaning.

“The question of Independents is the very reason as to why the Central Executive committee and other senior Party leaders are traversing the country to build consensus between our flagbearers and those that lost in primaries,” she said.

Namayanja also exhorted the party flag bearers at all levels to work as teams to mobilise grassroot support for President Museveni.

She was flanked by Hon. Mathias Kasamba, the Party’s Director for mobilisation and Hon. Emmanuel Lumala Dombo the Director for Information and Public Relations.