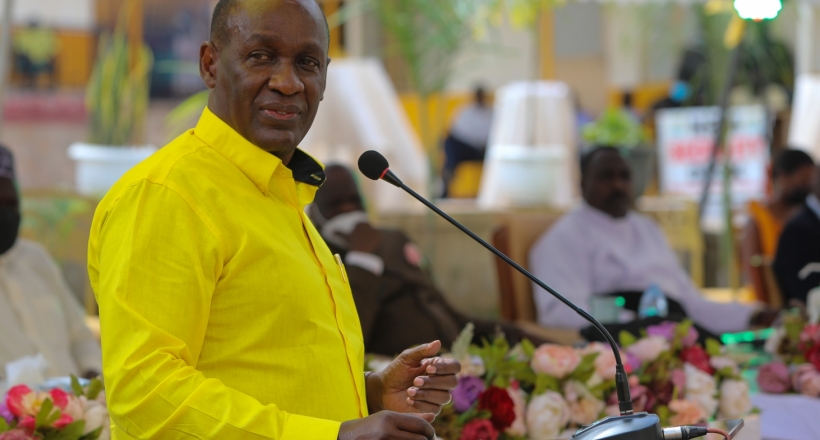 The National Resistance Movement (NRM) has on Tuesday held a thanks giving ceremony to prize the achievements the party has registered in the year 2021 following the Presidential elections victory and overwhelming winning parliamentary seats and other local council elections.

The ceremony which was held at the party headquarters in Nakasero Kampala was graced by the deputy NRM chairman for eastern region, Captain George Mike Mukula.

The ecumenical service which was attended by all NRM workers in total observance of COVID-19 guidelines started at 10:00am with a choir leading those in attendance in worship.

The presiding priest, Rev. Patrick Kamara of All Saints Nakasero urged the congregation to respect God by offering good and effective leadership to all Ugandans regardless of their political affiliations.

“NRM is a party in power; therefore we expect its leadership to serve all Ugandans regardless of their political affiliation. Whether you disagree or not, we are all Ugandans and we need to treat each other with courtesy,” Kamara said.

He thanked the president for offering himself to lead Uganda with unreserved dedication and asked God to grant him life such that the country can benefit more from his experience.

Sheikh Muhammed Ali who represented the Mufti of Uganda, Sheikh Shaban Ramathan Mubagye, thanked the NRM Secretary General for his effort to fix political challenges within the party through reconciliation.

“Reconciliation is a Godly practice and it is imperative to work in harmony with others,” Sheikh Ali said, adding that, “Forgiveness is a quality of a good leader.”

Monsignor Gerald Kalumba a priest attached to Christ the King Parish, condemned the acts of selfishness among leaders saying that, “such acts creates hatred among people.”

“Under General Museveni this country has been very peaceful. Museveni has been fighting for the last 35 years to bring peace and stability in this country. The NRM has however defeated over 26 armed rebel groups operating in different corners of this country,” Mukula said.

“The NRM leadership has reduced the infant mortality rate leading to the steady population growth. About 80-percent of the population is the creation of the NRM meaning that the bigger population of this country is youthful,” he adds.

But Mukula pointed out poverty and unemployment as the leading challenges posed by high youthful population but assured Ugandans that the government is mitigating the solution to include the youthful generation into cash economy.

As a solution to curb unemployment, Mukula says that the government has encouraged industrialization by gazzetting more industrial parks across the country. As a result, industries have grown from 18 in 1986 to now over 600.

The Secretary General of the NRM party Rt. Hon. Richard Todwong condemned land grabbing in the country and castigated all perpetrators, saying that NRM government is ready to fight for the common person who face the injustice of all sorts.

“The issue of land is a serious matter in this country, but I urge all the party leaders to resist and fight against land grabbing and unlawful evictions. The government is looking for the lasting solution to compensate the exploitive Mailo owners,” Todwong said.

Amiably speaking, the Secretary General thanked president Museveni for his visionary leadership saying that it is through him that all the NRM achievements are possible.