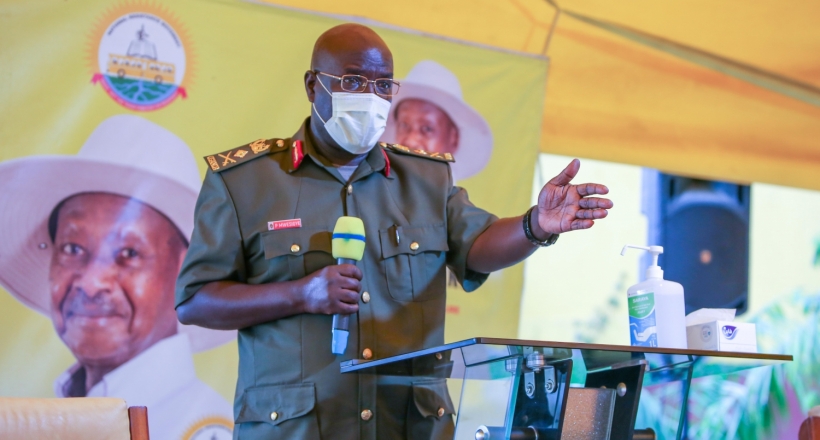 The Commissioner for Patriotism in the Office of the President, Brig. Gen. Patrick Mwesigye has rooted for mindset change prioritization if the country is to attain upper-middle-income status.

Mwesigye was on Thursday afternoon delivering a lecture on “Patriotism ideology and mindset change: an imperative for socio-economic transformation” during the weekly NRM ideological clinics at the party headquarters in Kampala.

He said that one reason why some people are developmental while others are wallowing into poverty is because of a poor mindset.

“Without first transforming people’s minds, there will be no development. Even if you introduce as many governments programs as you can they cannot achieve anything without having people well prepared in the mind.” Mwesigye said.

Mwesigye adds that “for any organization to succeed, it must have a progressive ideology,” he said, commending NRM’s ideology for being pro-people, the reason the party has been registering successes.

The custodian of patriotism ideology training, which is the first pillar of the four NRM ideological principles says that every person is born without values, but they acquire them as they grow. He says “if one fails to acquire these values then they become society misfits, economic saboteurs”.

“Since these values are acquired, Mwesigye says, “patriotism teaching has been realized to enable us to become better thinkers and creators to transform our societies. Everyone needs positive values and beliefs,” He said. “Countries which have acquired upper-middle-income status have national ideologies to inculcate national culture in its population,” he adds.

Mwesigye, therefore, says that people’s minds have to be transformed to enable them to participate in programs meant for them. “Education, training and development are key in that respective order, you need to have all the three to realize your goals.

The bush war veteran requests the government to adopt the national service programs that will see the multi-sectoral collaboration such that many people can be reached out to.

He however blames Africa for not embracing science and technology which is the driver for social transformation.

“For any society to grow, he said, it must embrace science and technology, which is more important than humanities. African has not done so and that is why we have lagged behind the western world and Asia,” Mwesigye stressed.

He, therefore, advocates for mainstreaming science education in our curriculum and make it more practical based to enable innovation given the presidential initiative of setting aside a fund meant for research and innovation.

The Director in charge of Mobilization, Cadre Development and Recruitment, Hon. Rosemary Seninde in her remarks asked Ugandans to appreciate what NRM has done in the last 35 years.

“I request all Ugandans to appreciate NRM’s achievements which are visible all over Uganda. We do not need to go back to the history that we all know. We only need to know where we want to go as a country,” Seninde said.

“These ideological clinics are not only beneficial to NRM supporters but every Ugandan. Therefore we are keeping you ideologically oriented for your benefit. New ideas to add value to you people will be coming to you, so embrace them,” She concluded.