Lumumba spots limited publicity, indiscipline among leaders as NRM party challenges during hand over to Todwong 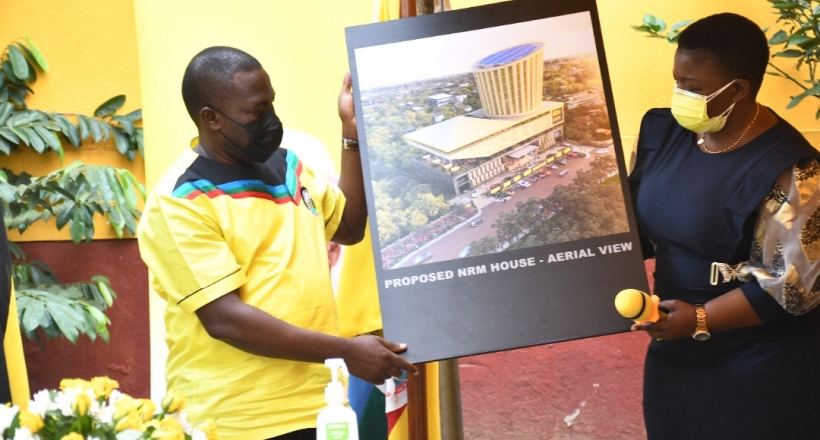 Limited publicity, some isolated cases of indiscipline among senior party leaders and constant blame have been identified as the major challenges affecting growth of the ruling National Resistance Movement Party. This is according to outgoing party Secretary General the Rt Hon Justine Kasule Lumumba, who today handed over office to her successor the Rt Hon Richard Todwong in a ceremony at the party headquarters on Kyadondo Road in Nakasero, Kampala.

Lumumba last week assumed her new role as Minister in charge of General Duties in the Office of the Prime Minister, after seven years at the helm of the ruling party. She replaced the Rt Hon John Patrick Amama Mbabazi in December 2014.

Rt Hon Todwong has been second in command as the deputy secretary general which position has now been taken by the Rt Hon Rose Namayanja the immediate former party National Treasurer.

In his acceptance speech, the Rt Hon.Todwong thanked the party National Chairman President Yoweri Museveni for entrusting him with such a big office.

“I want to pledge loyalty, dedication, commitment and regular consultation in the due course of executing my duties at hand as a party Secretary General,” Todwong pledged.

He empathized that during his tenure the party will work together with government to ensure implementation of the party manifesto and service delivery in the next five years.

“As a team leader, I will endeavour to discourage intrigue, indiscipline and laziness instead I will work towards improving unity cohesion and motivation among staff and members of the party”, Todwong added.

He also encouraged open positive criticism and advice from party members and all well-wishers that strive to make NRM more competitive and a vibrant party.

In her handover speech, Lumumba thanked party Chair and President Yoweri Museveni together with the Central Executive Committee for offering her a rare opportunity to serve Ugandans.

“Iam highly indebted to President Museveni for appointing me as the first female Secretary General at a time when the party was going through turbulence,” Lumumba said.

During her tenure, the party has registered victory in two general elections from the Presidential to local councils including the recent January elections and that of 2016.

NRM has also enhanced strategic partnership with revolutionary and vibrant parties from the African continent and those overseas. These include China Peoples’ Communist Party (CPC) of China, Chama cha Mapenduzi (CCM) of Tanzania, ANC of South Africa, and Jubilee of Kenya among others.

Lumumba shall also be remembered for initiating and making an NRM digitalized register that has a membership of over 13 million Ugandans.

Other achievements include buying space where the party headquarters are sitting, procurement and distribution of bicycles and motorcycles to NRM village chairpersons and sub county chairpersons respectively.

Lumumba pledged to remain a loyal member of NRM who is readily available to offer advice to the party leaders whenever called upon.

Hajji Moses Kigongo commended Hon Lumumba for being a good mobiliser and tirelessly dedicated all her energies to making sure the party progresses.

“Leaders should be truthful and dedicated to work for ordinary citizens, Ugandans require service delivery but not people who are great talkers,” Hajji Kigongo told leaders who were gathered.

Todwong comes in at time when the NRM support especially in Buganda and some parts of Busoga is downsizing and tilting to the opposition.