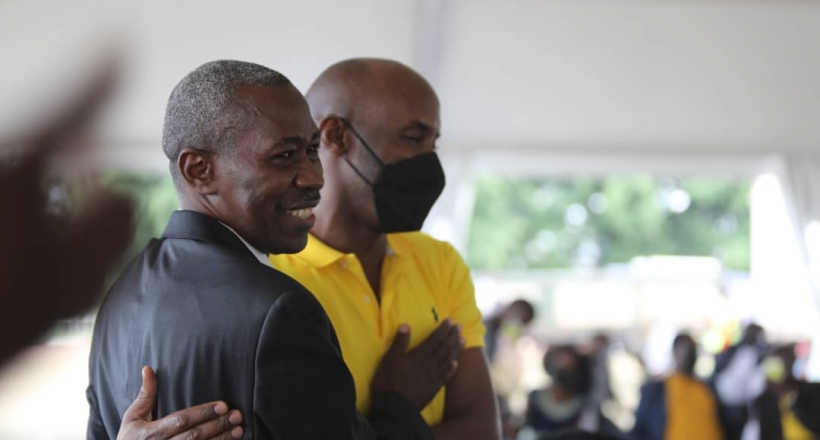 President Yoweri Museveni has said Ugandans vote for the NRM because it has for years been known for providing security to Ugandans. The NRM party chairman was speaking during a party Parliament Caucus meeting where he assured the country that the government would work tirelessly to ensure that life and property for all in the country continues to be protected.

Mr Museveni underscored the efforts by his government to install security cameras which he said would help security agencies to track criminals. He said this move would be followed by the installation of security trackers in all vehicles and motorcycles.

“One of the people's needs is Security and other one is infrastructure, the infrastructure has helped us economically, security wise and also politically,” the President told the NRM MPs assembled in Kololo on Friday. He added; “The other need that you as leaders should address is education of the children of the poor, then health and drugs in the health centres which are stolen. You have seen how my monitoring unit has been arresting people stealing drugs in health units. Nurses and doctors are corrupt. You as Members of Parliament should take interest in your health centres. Go and check, that is what you are supposed to do as leaders.

He advised the MPs to address the issue of household income if they are to succeed as leaders. “These little things you do, fundraising in church, attending burials, will only give you cheap popularity but eventually people will get tired and move on. I appeal to you to concentrate on the issue of the wealth of homes,” Mr Museveni stated.

He sited Buikwe District MP Diana Mutasingwa who approached him for advise on mobilising her people in the district. “Mobilisation has never been an issue for the people. As a leader you need to get a lasting solutions for your people these are security, infrastructure, health, education and wealth,” he advised. Saying that once MPs teach their people about commercial production they will then get lasting support.

“You as leaders have a very serious problem of changing the attitude of your people, that is where the problem is. The people need to understand that you can have a good life from small scale commercial farming with calculation (ekibaalo). This is not a small thing but it's the only way, once your people understand you will have a walk over. I appeal to you to concentrate on that these,” he added, asking MPs to support the NRM’s policy of free education as well as help in the fight against drug theft in hospitals, as well as wealth creation.

The President told the MPs that the country will only address the issue of jobs for the youth through wealth creation. He retold his story of Nyakana who he introduced to the MPs during their retreat at the National Leadership Institute, Kyankwanzi in May. He reminded them about how Nyakana and the wife were not employed until they took his advice. Since then Nyakana and his wife employ 15 people on just an acre of land. “If on one acre one can create 15 jobs how many jobs will one create from the land owned by 7 million households in Uganda?”

Mr Museveni said if this strategy is employed, 70 million jobs would be created with each household employing 10 people. This he added would be bigger than the population in Uganda and would therefore mean the country will have to import labour. “Many people who say they are Baganda are telling lies they are Banyarwanda and Barundi. If you go to Kayunga and Busaana the people there are all Kakwa people from south Sudan. How did those people come here? They came here because of the limited commercialization that had already taken place in growing of coffee, cotton and sugarcane within Uganda. We didn't have enough workers that's why they had to come from other countries to help,” he explained.

Mr Museveni also sited Namanve which currently has 74 complete factories and 147 factories under construction. “When all the factories in that industrial park are constructed, they will total 500, employing 200,000 people on 2,000 acres.

The President also applauded the NRM Caucus that he said has started well since there is cohesion among members unlike the other groups that he said members were against each other.

“You seem to be polite, quiet and not rude and I praise God for this. I congratulate you on the way you have conducted the elections today. I also congratulate the people who have been elected.”

Speaking at the function, the NRM Secretary General Rt Hon Richard Todwong applauded President Yoweri Museveni who is also the national party chairman for choosing him to lead the mighty party.

“I thank you for trusting me to lead the Secretariat of the party and the task you have given me and my colleagues will be delivered 100%,” Rt Hon Todwong said.

He urged leaders at all levels to get involved in party activities aimed at fighting poverty among the local population.

During the meeting, the party held elections to replace the late Hon Mathias Kasamba as one of Uganda’s representative in the East African Legislative Assembly (EALA). Hon James Kakooza emerged victorious with 93 votes, beating former State Minister for Tourism Hon Godfrey Kiwanda Ssuubi who got 85 votes whereas Mr Abbas Mutumba got 54 votes.