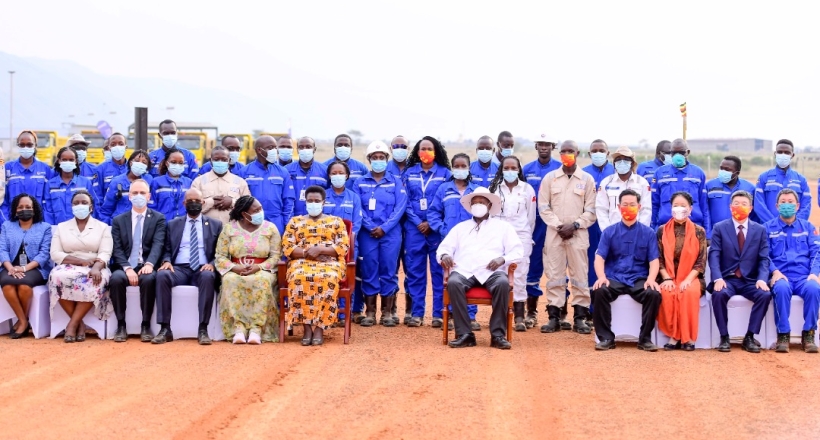 President Yoweri Kaguta Museveni has reiterated the government's commitment to use oil and petroleum resources carefully for a long time now that Uganda has got capacity and expertise on what to do in the oil and gas sector. The President made the assurance on January 24, 2023, as he officially launched oil drilling activities at the Kingfisher Development Area in Kikuube District that involved commissioning of the Kingfisher drilling rig for all 31 oil wells, including the deepest well which is over seven kilometres in depth.

The drilling rig, LR8001, arrived in Mombasa on September 12, 2022, and a total of 280 trucks delivered it in bits at the Pad-2 site in the mid-western Uganda district of Kikuube. Its erection and installation works were concluded in November 2022 following third-party inspections.

The Kingfisher Development Area is operated by China National Offshore Oil Corporation (CNOOC), one of the largest oil and gas companies in Uganda's energy sector.

These areas include; Moroto-Kadam Basin in Karamoja, parts of Lango and Kaberamaido which are part of North Kyoga Basin and the Hoima basin (Kafu) between Hoima and Masindi.

“We shall look for all these oils and use them carefully for a long time,” H.E Museveni said.

The President saluted Ugandan scientists for discovering oil resources in 2006 after the British initial attempt in 1920 who saw oil oozing to the surface at a place called Kibiro but later in 1956 established that oil existed but later evaporated according to the report of the commissioner of Geology by then.

The president went on to explain how a few days into government in 1986, a group from Shell BP came and wanted to sign an agreement with him about oil exploration in Uganda but declined since he (the President) did not have anybody with knowledge about oil in his government then. He later sponsored Ugandans to train in Petroleum studies.

“I called the minister Chango Macho and the Permanent Secretary called Opio, and I said, you people look for Ugandans with bachelor’s degrees in Chemistry, Geology and Physics to go for a Master’s in Petroleum Studies. They will be the one to guide us after they have studied. They went in 1987 and they came back in 1989,” H.E Museveni said, adding that the group embarked on the discovery of oil which they later found in 2006.

“This is where I want to appeal to leaders. Avoid bumping into things you don’t know about ‘Okutomera’ in Luganda. If you’re not sure of something, ask and you’ll be helped. I’m very happy for these people (scientists) who went for training. When they came back, they didn’t let us down. I thank them very much and I salute them,” the President said, adding that this helped him to avoid making huge decisions on behalf of Ugandans which he was not sure of.
He also thanked the oil companies and partners for bringing their experience and resources to invest in Uganda’s oil industry.

“I want to thank CNOOC for moving, I hope others are also moving. We are therefore moving forward with the oil. For us here we are very careful. We shall develop our oil resources but also develop solar energy,” H.E Museveni said.
On the other hand, the President urged local residents to engage in agriculture and produce food that will be consumed by those working in oil fields. “That is one of the areas where you can tap wealth.”

The president cautioned against encroachment on Bugoma forest that is so influential in environmental protection. That forest is very important. “This oil you’re talking about is coming mainly from plants which were buried in the Rift Valley here but coming from escarpment that were squeezed to produce the oil,” Gen Museveni said.

Earlier, in the day, the President commissioned the Kingfisher Oil management waste facility and planted a tree at the 200-acre oil waste plant. The UPDF through the National Enterprise Corporation (NEC) is set to manage oil waste from the Kingfisher oil development area in Kikuube district.

Vice President Maj (Rtd) Jessica Alupo Epel on behalf of the people of Uganda congratulated the President on what she termed as “a very big milestone on the commencement of the drilling of oil and gas in our country”.
She further noted that the benefits that the people of Uganda have achieved as a result of oil exploration cannot be over emphasized.

“And most importantly we all know that the basis of why we have development partners here today is because of the fundamental role that you have played in ensuring that Uganda is safe and secure. And with peace and security we are therefore able to attract investors but also participate in the transformation of our country,” the Vice President noted.

The Minister for energy and mineral development Hon. Ruth Nankabirwa noted that the event comes less than a year after the announcement of the final investment decision was signed by joint venture partners in Uganda’s oil and gas industry for the upstream and the East African Crude Oil Pipeline (EACOP) project on the 1st of February 2022.

“I therefore take this opportunity to congratulate CNOOC and its upstream partners that is Total Energies and Uganda National Oil Company (UNOC) for achieving these milestones,” Hon. Nankabirwa said.

She further informed the gathering that the refinery project continues to register significant progress and the Albertine Graben Energy Consortium undertook front end engineering and design that was approved by the government in July 2022. She said the environmental social impact assessment study is also near completion.

“Your Excellency, we have made sure that we leave no stone unturned on all the international requirements because we know that not everybody wishes Uganda and Africa well. What we have done is to make sure that we have put in place all the requirements. We are going to drill, knowing that we have taken care of environmental, health and safety issues,” Minister Nankabirwa said.

Minister Nankabirwa thanked President Museveni together with his colleague H.E Samia Suluhu Hassan, the President of the Republic of Tanzania for their steadfast support and guidance towards the success of the EACOP project.

“In a special way I want to pay special tribute to H.E John Pombe Magufuli - former President of Tanzania (RIP) for his exceptional commitment he had shown to the development of the East African Crude Oil Pipeline (EACOP).
Representing the Minister for Energy of Tanzania Mr. January Makamba, the Ambassador of the united republic of Tanzania, the Ambassador of Tanzania to Uganda, H.E Dr. Aziz Mlima informed the President and the gathering that his country remains committed to the EACOP project and so far about $120 million has been contributed in addition to compensating project affected persons.

The Chinese Ambassador to Uganda, Zhang Lizhong congratulated Uganda on the spudding of Kingfisher Oil Field, describing it as an important milestone not only in the development of Uganda's oil industry but also a major event in China-Uganda cooperation that is celebrating 60 years of diplomatic relations.

“The Kingfisher Oilfield Project invested by CNOOC is China's largest investment project in Uganda now. I firmly believe that it will bring new development opportunities to the Ugandan economy, and will certainly contribute more to the practical cooperation between our two countries,” Ambassador Zhang Lizhong said.

The President also witnessed the handover of the license to Construct the East African Crude Oil Pipeline (EACOP), by the Minister of Energy and Mineral Development, Hon. Ruth Nankabirwa.

The construction license is required to enable EACOP to formally start on the ground construction activities in Uganda as part of the development of the 1,443km, 24-inch diameter insulated and buried crude oil pipeline that will start from Kabaale, Hoima in Uganda to Chongoleani, Tanga in Tanzania.

Speaking at the handover ceremony, Mr. Martin Tiffen, EACOP Ltd Managing Director, said, “This marks another step forward for EACOP as it allows the commencement of our construction activities in Uganda upon completion of the ongoing land access process. We are grateful to the government of Uganda for the expedited delivery of the application as per the commitment in the Host Government Agreement (HGA) and the continuous support for implementation of the EACOP project.”

The East African Crude Oil Pipeline is a 1,443km crude oil export infrastructure that will transport Uganda’s crude oil from Kabaale - Hoima in Uganda to the Chongoleani peninsula near Tanga in Tanzania for export to the international market.

District Chairman (LC5) Kikuube Peter Banura welcomed the President to the district. “It is indeed an honor to host you for the very first time since the inception of this district in 2018,” he said.

Mr. Banura on behalf of residents sought interventions into some issues to maximise the potentialities that come with the oil resource. These include extension of ferry services to ease transport and business opportunities between Uganda and the Democratic Republic of Congo, connecting more towns to the nation's electricity grid and more funds to further develop the infrastructure in the district.