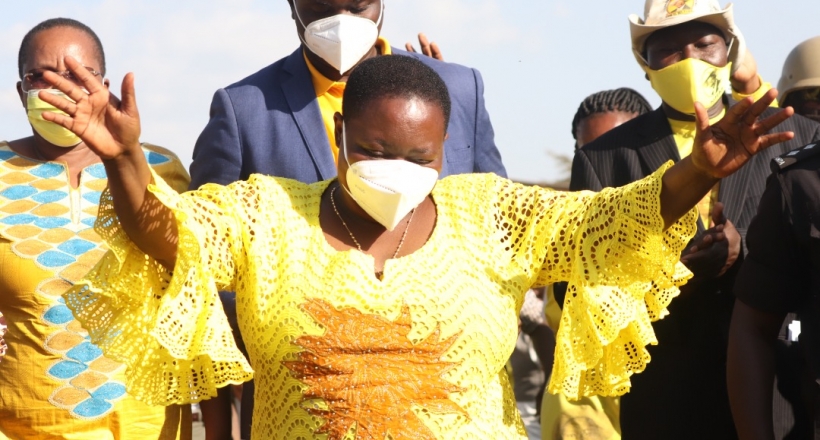 Prime Minister Rt Hon Robinah Nabbanja has called on voters in Kayunga district not to fall for the lies peddled by the opposition in the ongoing LC5 campaigns.

“I know they were here and told you several lies. They said all bad words about the NRM but all were lies. It is only NRM that will ensure service delivery and development of the district. By voting for an NRM candidate Andrew Muwonge as the LC5 chairman, you will ensure Kayunga prospers,” Nabbanja said.

The Prime Minister who was accompanied by the NRM director for Mobilization, Rosemary Sseninde, and the NRM Women league chairperson Lydia Wanyoto among other party officials told the people that whereas the opposition continues to spread lies about the current government, the truth will always be known.

“They speak all they want because the NRM government has given them the freedom to say whatever they want. However, all they are telling you are lies. It is the NRM government that has built hospitals, constructed roads and schools among other services. How will a person who is not in NRM be able to extend those other services that are lacking? It is only wise to vote for NRM.”

“The opposition MPs you voted have failed you. If we make promises as government, how will they follow them up if they are only interested in opposing government?”

The NRM Director for Mobilisation, Rosemary Sseninde told the gathering that during the 2021 general election, the NRM was given the mandate to lead the country for the next five years and noted that all leaders are implementing the NRM manifesto.

“No one should deceive you that they will implement their manifesto apart from the one of the NRM. The opposition will only sabotage this since they want to discredit the NRM. The people of Kayunga should therefore vote for the NRM candidate who will link you to the central government,” Sseninde said.

Kayunga district will on 16th December vote its LC5 chairman to replace Ffeffekka Sserubogo who passed on in June.

The by-election race in Kayunga has six candidates of which NRM's Andrew Muwonge is poised to win.