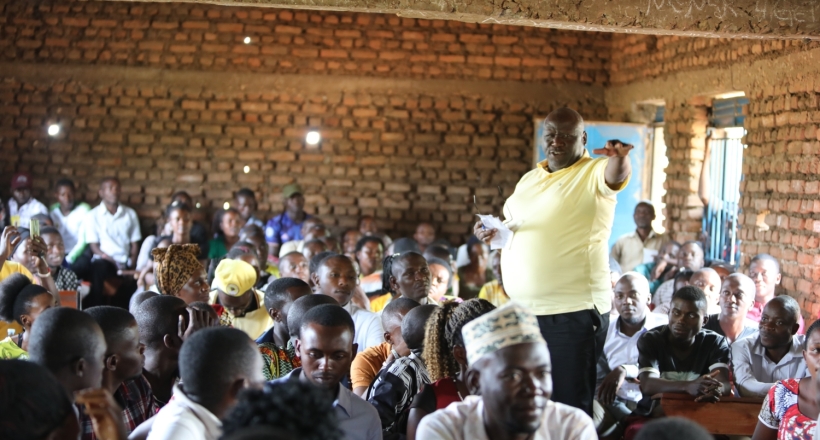 The Director of Communication at the National Resistance Movement (NRM) party has faulted the past opposition leaders especially Members of Parliament of Kasese district for politicking at the expense of service delivery to their people. Kasese district was previously the bed of the opposition.

Mr. Dombo said that once elected, the parliamentarians only went to Kampala to critize President Museveni and his government instead of working with the same head of state to improve the lives of residents.

“I am so saddened by the plight of the beloved people of Kasese who for so long had been deceived by some opposition elements, yet their lives were continuing to sink in misery. For a little while, I have been in this area, I have witness poor service delivery in education, health and road infrastructure due to bad representation,” Hon. Dombo remarked today as he addressed hundreds of youths from Busongora south constituency gathered at Muhokya primary school in Muhokya town council.

The NRM’s head of communication however, revealed that the populace of Busongora south have got an opportunity in the coming by-election to end the long spell of misrepresentation and underservice by voting the NRM candidate, Mr. Thembo Gideon Mujungu who will work with government to ensure that their standards of living are improved.

“Entrust your leadership with ruling party in the approaching poll so that we pursue positive change and realize the youth agenda of skills development and keeping hopes alive,” Hon. Dombo said, noting, “ socio economic transformation is our deliberate interest to all people as we strive to secure the future.”

In his speech to the young people, the NRM flag bearer, Mr. Thembo Mujungu asked the youth to support his quest of representing Busongora South to accomplish the tasks and projects he already started on.

“Kindly go back to your homes and reflect on the benefits of siding with the government. You deserve much better than what is happening in your ordinary lives. The narrative and trajectory here should change for residents to feel they are part of their beloved country,” Mujungu said as he challenged the youth leaders.

“I implore you to not only support me but to also campaign for me in your homes and friends as we martial for victory,” Mujungu said.

Some of the youth who spoke in the meeting pledged to campaign for the NRM ticket bearer going ahead to explain the government’s youth agenda. They said this will enable to win support and demystify the lies of opposition.

Mr. Mujungu together with his team will later proceed to a mega campaign rally which will be headlined by the NRM 1st vice National Chairman, Al-Hajj Moses Kigongo.