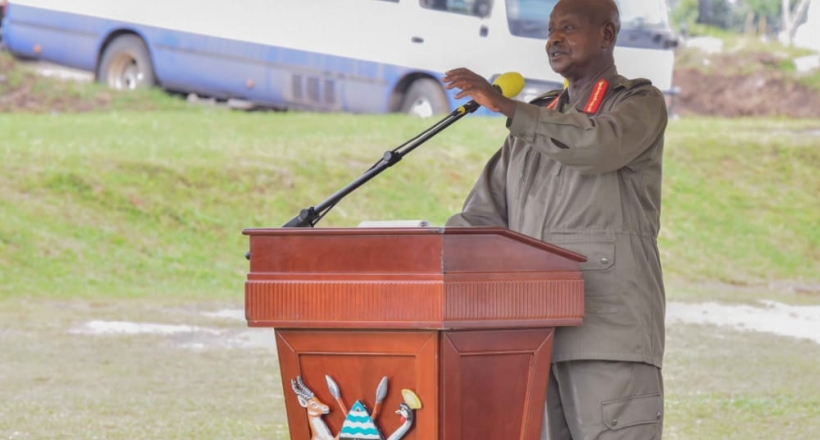 To describe the successful execution of Operation Shuja in the Democratic Republic of Congo against the ADF bases, President Yoweri Museveni used ‘the food’ metaphor to drive his point home.

“War is like eating food. Food is food but without different elements added to it, it can be a problem. It can even kill you. Food like cassava can choke you. Food can be good but if you take only one element, it can be disastrous. In order for you to eat successfully, you get the cassava, sauce, salt and other additives. You can’t get salt and eat it alone. You can end up in hospital. Everything must be combined properly and washed down as food.. this is the same as war, a combined assault,” Museveni said praising the Commanders and men of the UPDF for the operation that involved Air power, Artillery and accurate reconnaissance that saw ADF bases in the Eastern DR Congo neutralized and remnants scattering into the vast Rwenzori Mountains and jungles.

A combined UPDF section is in pursuit and the President who is also the Commander in Chief assured the forces, ‘You should not stop pounding (Kusekula) until you achieve your desired grade (Kunoza)’

President Museveni commended UPDF Officers and men for the successful Operation Shuja that was launched on the 30th November 2021. This was during his visit to the Mountain Division headquarters at Muhoti Barracks in Fort Portal, Kabarole District where he congratulated the Mountain Division Specialised Force for the successful operation in the D.R. Congo against the ADF rebel training camps and positions.

“I came to congratulate you on this very successful operation that we started on the 30th November 2021. It was well planned and executed. I want to thank the Commanders and troops. UPDF has now understood the importance of combined arms. Your commanders must understand the concept of combined assault. This Operation was very good. Everything was there..the food, the salt, the water! You started with accurate reconnaissance, artillery and airforce” he said.

He urged the UPDF leadership on more training for confidence in tactical operations and using weapons in difficult terrains.

“I want you to tighten the loopholes. Don’t send people who are not psychologically prepared. All officers must be there with them, don’t train with stick. Training, training, training and confidence! The NRA built a lot of confidence, this is the confidence we want for our soldiers,” he said.

He cautioned that every soldier must understand the structure of the war and that once they are confident as individuals, they should work as a group in order to achieve the set goals.

“Each soldier should have enough bullets, know the terrain and coordinate as a group. This is the confidence we want,” he said.

He was pleased to note that Operation Shujaa was progressing well and thanked them for the good relationship they have with the people and the Congolese soldiers.

The Chief of Defence Forces, Gen. Wilson Mbadi said that the preliminary aim to destroy the ADF camps was achieved. He reported that UPDF was now uprooting the remnants that are currently retreating in small groups into the mountains and jungles.

He saluted the President for his guidance in building the UPDF into a formidable force and revealed that the army was constructing more buildings to address the housing requirements of the soldiers. He revealed that plans were underway to acquire more modern machines so that we may have a more effective force.

He was pleased to note that the rebel group was defeated in the triangle of death in Eastern Congo and reported that there was a tremendous reduction of killing and abducting civilians in the UPDF operation areas.