Civil-military relations have enabled peace and stability in Uganda 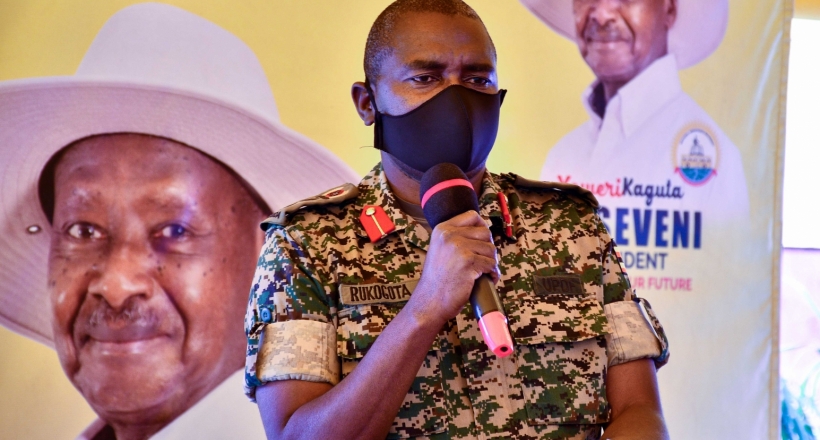 The head of the Joint Intelligence Committee at the Chieftaincy of Military Intelligence (CMI), Col Okei Rukogota has hailed the Uganda People’s Defence Forces (UPDF) for building a strong relationship with the citizens that has enabled the force to maintain stability in the country.

Rukogota was on Thursday afternoon delivering a lecture on “Defense, Stability and Civil-military relationship” in weekly NRM ideological clinics at the party headquarters in Kampala.

He said that the UPDF has managed to cease power and work with people to create an environment that enables everyone to prosper through the peace created.

Rukogota also said that UPDF works within constitutional means and their mandate is regulated by the national laws which stipulate the conduct of citizens, and the force is not exceptional.

“Chapter 12 of the constitution requires UPDF to be professional and create an environment that enables our citizens to pursue their interests and national objectives. And we have performed so well,” he says.

The intelligence chief thanked the Commander in Chief of the defence forces, H.E Yoweri Kaguta Museveni for his good leadership of the forces that has seen it becoming more productive and enterprising.

“I thank the Commander in Chief for building a force that does not live a parasitic life, a force that continues to live for national objectives and interests. We are enterprising, we have a national enterprise corporation. So, we are at the forefront of social-economic transformation,” Rukogota said.

“Without socio-economic transformation,” he adds, “we cannot consolidate our security. It is the economy that fights wars”.

He assured Ugandans that the UPDF has built the capabilities to defend them and deter any terror attempts.

“A secure situation is the one free from threats. The UPDF core objective is to defend national interests. And that's why we have to eliminate threats”.

Rukogota advised Ugandans to foster mindset change if they are to transform societies where they live.

We can always get forward movement if we continuously challenge ourselves to arrive at concrete truth. Mindset change evolves and it's not new to the revolutionaries. You need to use it to create an impact on society. You can use it to change the thinking of an enemy. Hopefully, the ideological clinics are the solution,” he said.

While delivering a lecture on “Maintenance of Law and Order from a Perspective of Community Policing,” the Assistant Commissioner of Police Hillary Kulayigye said that all citizens must play their respective roles for the safety and security of the communities.

“Community members should be the ones to identify problems within society before calling the police. Much as we have police posts everywhere, we need the community for security partnership. Each one of you needs to play a role in ensuring the safety of our communities. But are we doing enough as leaders and vigilantes? Many issues get covered up and they go unnoticed,” Kulayigye said.

“We are living in complex societies,” he adds, “so we cannot do much without your help. The community policing is only successful when we work together. That is why crimes are now low because communities are organized”, he stressed.

Kulayigye asked Ugandans to take community policing seriously saying that it has worked in many countries so it can’t fail in Uganda. He said that relying on few police officers in an area is not good.

“Let's take community policing a serious activity. It has worked everywhere. It has to work in Uganda as well. You play an intelligent role anywhere anytime. Absences of crimes protect our businesses. You may not rely on few police officers deployed. But when you join and identify those black spots, it can save a lot,” he said.

In his closing remarks, the Secretary-General of the NRM party Rt Hon. Richard Todwong challenged the current group of youth who are not interested in reading but rather rely on social media for information.

“The challenge with the current crop of youth is that you don't want to read. You are not knowledgeable enough because you limit your research to social media information. The mindset change you need is to read a lot more books. Unless you will remain at the receiving end of knowledge,” Todwong said.

Todwong also asserts that a person changes circumstances for the better after developing discipline and character. He advised young revolutionaries to embrace discipline.