Bad Governance Compelled NRA to Go to the Bush in 1981- Gen. Katirima 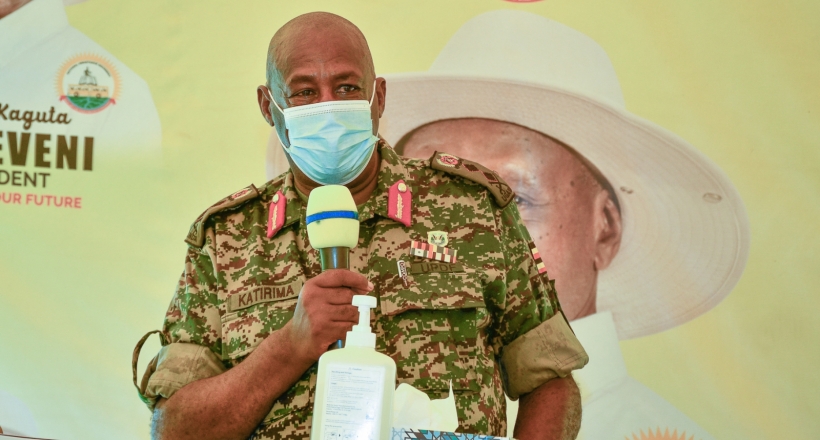 Former bush war hero, Maj Gen. Phinehas Katirima has told the country that National Resistance Army led by President Yoweri Museveni wouldn’t have waged a war against Obote’s government if there was good governance in the country.

Katirima was on Thursday afternoon delivering a lecture on “Compelled to Action: The Highlights of the NRM revolution” in weekly NRM ideological clinics at the party headquarters in Kampala.

He said that by 1980, social, economic and political situation in the country were at worst and people had been driven to the wall by state excesses, the reason they chose to take up arms to fight bad governance.

“Obote was not apologetic and wanted to start off from where he had left off in 1971, when he was overthrown by Idi Amin.  The controversial December 10, 1980 General Elections were the last straw that broke the camel’s back;  People took up arms against arms,” Katirima said.

“Generally, he adds, “the people wanted Democracy and wanted to freely and fairly chose their Leaders and actively participate in democratic processes and be heard and listened to in good governance. Obote was strongly opposed to this”.

Katirima explained that the people were hell bent on fighting Obote II fraudulent government out of power for very good reasons and their cause for war was justified.

“That was the reason the majority of Uganda supported the War and why we, particularly, joined it to make all possible contributions for the liberation, transformation and achievement of the NRM revolutionary ideal,”

The former legislator also said that, since the country was on its knees, there was a need for sacrifice, dedication, selflessness, commitment and readiness to pay the ultimate price for change that shall culminate in the achievement of the desire ideals for a better future for others and the nation, including present and future generations.

“We were doing something for the betterment of the Nation. We were driven by patriotism, selflessness, dedication and commitment. We were ready to sacrifice for a better future for others and the nation,” Katirima adds.

“Obote had forgotten nothing and learnt nothing from his ouster, in 1971 and his dictatorial rule from 1966 to 197. He hated Ugandans and especially the Baganda. He had publically declared that “a good Muganda is a dead one” and the Baganda resented him and the UPC, in retaliation. He had invaded their Kabaka’s palace in 1966 and forced their Kabaka (King) to flee into exile in London where he died on 21 Nov 1969,” Katirirma narrated.

Referring to the 1980 disputed election that ushered Obote into his second regime as the president, Katirima said that, it was unfortunate for Obote to boast about his rigging tactics and take the country hostage by hijacking the electoral system.

He adds that NRM has managed to rid the country of such acts and has introduced popular democracy that allows full participation of all citizens in governance decision making.

“The NRM Revolution has espoused popular democracy, where Uganda-peasants, workers, intellectuals and national capitalists aspire for and participate in the governance and decision making, on all matters that affect them, at all the levels of governance,” he said.

On socio-economic transformation, Katirima said that the NRM revolution has worked for the Society and economy. He adds that the section of the Ugandan peasants who are predominantly in the majority now at about 68% of the population, can continuously transform through education.

“We must have a society comprised of owners of capital on the one hand and the skilled workers of capital on the other hand, as witnessed in the developed (First World).  He said, adding that, Uganda which is predominantly a peasant, agricultural country must continue to transform, into an industrial country, with developed services and ICT sectors, backed up by Tourism. Few intellectuals and not peasants must remain in the agricultural production, ensuring high agricultural production of food and raw materials through enhanced productivity enabled by science and technology”.

In his closing remarks, the Secretary General of the NRM party Hon. Richard Todwong reiterated that by 1986 there was nothing the country could pride itself on due to the broken sectors of the economy.

“By 1986 the infrastructure level of the country was bad and the life expectancy was at only 42 years which was so low. All our educated people had gone into exile and Uganda was a failed state. The NRM had to restructure all the sectors and this had to take time given the fact that the government was still young,” Todwong said.

He however applauds the Generals of the NRM revolution for their commitment in serving this country. Todwong said that “We invite Generals to lecture us on the NRM Ideological clinics because there is no way we can separate the army from the revolutionary and liberation struggles”.

The NRM party National Treasurer, Amb. Barbara Nekessa said that, the ideological clinics are very important because they help in inculcating the core principles of the NRM to the people of Uganda.

She therefore promised to increase on facilitation for the ideological clinics due to the need of more time of interaction.