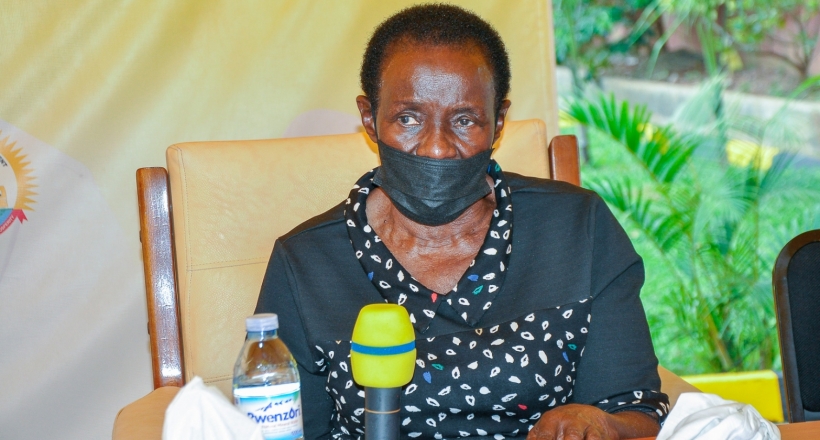 Njuba was yesterday afternoon giving a lecture on “NRA success in women emancipation and empowerment of persons with disabilities ever since 1986” at NRM party headquarters in Kampala.

As a pioneer woman combatant in the NRA bush war, Njuba said that she helped to convince other women to believe in NRA ideology and recruited many to join the liberation struggle.

“When the political environment became bad we organized ourselves with common interests and came together for a possible solution.

The Popular Resistance Army that gave birth to NRA was aiming at introducing a mass movement to change this country for the better.

The largest mass that was produced was largely composed of women who were also recruited in the army. And I played a big role in these recruitments,” Njuba said.

She adds that since NRM took over power in 1986, women have been included in big positions of leadership and they have been linchpins in society development.

“Because of world history where women were treated with different contempt, we decided to create an affirmative action to tackle that belief,” she said, adding that, “Look at our government today and the cabinet itself. It is not the usual cabinet. Women are at the helm of leadership,”

She, therefore, implores ladies not to shy away from but to fight and take up many roles even in other sectors given that democracy has been deepened in Uganda by the NRM government.

“We have so far achieved a lot in terms of democracy and human rights so we need to tighten a bit in order to consolidate this milestone. There are many sectors that are lacking women. It's high time women occupy that vacuum,” She said.

In order to achieve development, Njuba advises the government to be flexible and embrace ideas from experts and other key stakeholders like the business community.

“The businessmen, the educated and government leaders especially commissioners should not stick to the standing orders that are rigid and hinder development”. She said adding that, “Sometimes we do not need certain things. Just identify the priorities and what we need that are in the interest of Africa”. She advised.
In order to create a market for our local products, Njuba says that population growth is ideal. She also promises her tireless efforts to make Africa a free trade zone. “The large population is an immediate market. We cannot survive on a small population since we haven't learned how to create the market in the other way. Reducing the population is not a revolutionary thing. Africa is not yet full,” she stressed.

She also advised Ugandans to respect their leaders even when they have freedom of speech. “We are seeing people are no longer respecting their leaders. We can't work that way because we have human rights”.

Todwong reiterated that because we are highly controlled by the western world through donations and loans, they want to control our population. He, therefore, said that just like highly populated countries like China and India, Africa also needs to produce its own market.

He also requests that the issue of human emancipation should be a priority in every society.

On her part, the Director of Administration and Finance Hajjati Medina Naham said that the 11th Ideological Clinic was a historic one since it was graced by a woman, " I have always wondered whether NRM really lacks women of substance but today my questions have been answered by Gertrude Njuba's submission."

The session was moderated by the NRM EC Chairperson Dr Tanga Odoi who praised the ruling NRM government for recognizing the role of Women, Youth, PWDs and the elderly play in the transformation of the country. He said there is room for everybody to express themselves in the NRM.

In attendance was the NRM Director of Communications Emmanuel Lumala Dombo, the NRM Deputy EC chairman Kyalimpa Kiggyagi, the NRM EC commissioner Alisemera Babiha among others.