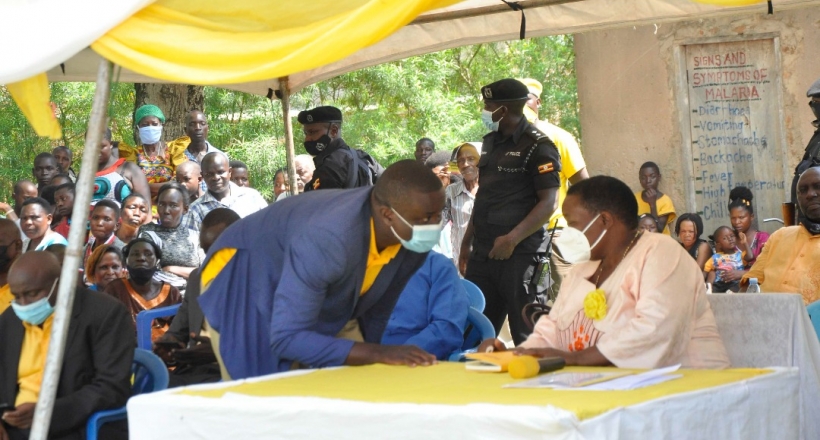 The Prime Minister, Robinah Nabbanja has asked the people of Kayunga not to fall for candidates who are only good at sloganeering but vote for NRM’s Andrew Muwonge whom she said will ensure service delivery for Kayunga.

“I am here for the NRM party and its candidate. In the 2021 general election, we voted for President Museveni as the leader of Uganda. The only gift we can give him is voting for an LC5 chairman who is from the NRM to ensure service delivery and skyrocketing development in Kayunga,”Nabbanja said.

“Don’t fall for those who are just sloganeering. Today they stand for the position of Member of Parliament and when they lose, they run to court. Before the case is decided, she is standing for LC5 chairman position. What will happen if the petition in court goes in her favour? Avoid such people.”

The Prime Minister was addressing a series of scientific meetings in Kangulumira and Nazigo Sub counties as well as Nazigo town council in which she rallied support for the NRM flag bearer in the LC5 race, Andrew Muwonge.

Nabbanja told the mammoth crowds that attentively listened to her message that unlike other candidates in the race, NRM’s Muwonge is reliable and if voted, the people of Kayunga are guaranteed service delivery.

“He stood for LC5 in the general election and lost. He conceded defeat and when the chance for the by-election came, he stood again. This simply means that Muwonge knows what he wants and is not gambling. He is consistent and has the Kayunga agenda,” she told the voters.

The premier told the gathering that the only gift they can give to themselves is voting for NRM’s Andrew Muwonge to ensure he links the district to the central government for proper service delivery and development.

The NRM director for Mobilisation, Hon Rosemary Sseninde reiterated the need for the people of Kayunga to vote for a person who will work closely with President Museveni in ensuring the challenges affecting the people are solved.

“Muwonge is the solution to the problems affecting Kayunga. Let the people put their differences and fights aside and vote for Muwonge to ensure the district moves forward,”Sseninde said.

Speaking during the meetings, Muwonge pledged to unite the people of Kayunga and working closely with everyone regardless of their political and religious affiliations.

“I am a son of the soil and I know well the problems affecting my people. I will bring on board everyone to ensure we solve the problems of Kayunga,”Muwonge said.

The meetings were also attended by other party officials including the NRM Vice chairman for Central region, Godfrey Kiwanda and  the NRM Director for communication, Emmanuel Dombo among others.