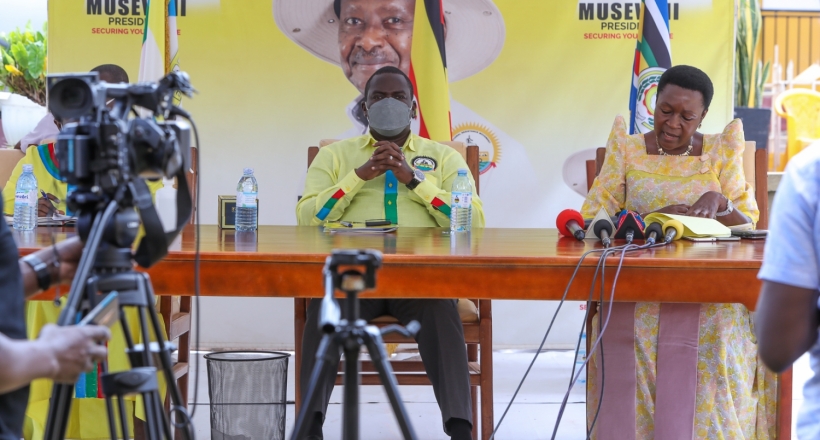 In a press conference held today at party headquarters, Rt.Hon. Todwong said his party emerged victorious with 82% in an election held last week on 15th and 16th December 2021. The Forum for Democratic Change (FDC) and National Unity Platform scored 2% each, as independents, but majority NRM leaning took 12%.

In the Kayunga LC5 by-election, the Secretary General castigated all people trading in negative propaganda with allegations that the NRM candidate cheated. He affirmed that Mr. Muwonge Andrew the NRM candidate won and was declared genuinely by the independent electoral commission.

“You will recall that during campaigns, some opposition parties had told the country that they would win by over 90% of the votes cast, little did they know that NRM had used its tested revolutionary methods of work by touching base with communities to address and explain in detail the programs on ground hence emerging victorious,” Todwong said.

According to the Independent Electoral Commission, a total of 735 positions were to be filled in a 591 delineated electoral areas, covering 124 districts, 12 municipalities and 470 sub countries. Leaders elected included chairperson, directly-elected councilors; women councilors and councilors representing Special Interest Groups.

The Rt Hon Richard Todwong, in the press conference said that the NRM - Central Executive Committee (CEC) adopted a mobilization work plan to guide its leaders in running party activities.

In a two-day CEC retreat held at Entebbe from 18th to 19th December 2021 under the theme "Mobilisation for Socio-economic Transformation", the members adopted a strategic working and policy document written by the party National Chairman, H.E Yoweri Kaguta Museveni to act as a guiding tool to the party leadership in execution of its work.

The committee members said that NRM must at all times side with the legitimate interests of the people as opposed to those of the oppressors such as sectarian politics of religion and tribe, gender chauvinism, corruption, selfishness and opposition to African integration.

In order to promote socio-economic transformation of people, members resolved to help rural farmers who are land owners to join commercial farming and abandon subsistence farming, what the president called working for the stomach.

On the issue of land, the CEC resolved to de-campaign land fragmentation, resist land evictions especially the "bibanja owners" through compensating the "exploitative" Mailo owners.

The committee members appreciated the extra-ordinary and steadfast competences of the party chairman, whom they referred to as un-relenting pan-African leader. They also commended the work done by the security forces in maintaining peace and order especially in neutralizing terrorism in the country.

They called on party leaders to ensure improvement of social services and amenities through enforcement of free education in all government schools, also promised cheaper electricity for manufacturers, eliminate all sorts of crimes and theft through improved security services.

CEC commended the Rt. Hon. Secretary General of NRM and the entire secretariat team on a vibrant and focused commencement of their tour of duty.

For a follow up of the resolutions, members have agreed to meet again in February 2022 for further but in-depth sectoral discussion of the aforementioned work plan and also to identify the policy ramifications.

On internal party elections, Todwong said the Central Executive Committee resolved that when the economy is fully open early next year, the NRM electoral commission will be rolling out a road map for the internal elections within structures of the National Resistance Movement from village to the national level.

“For avoidance of doubt, the term of the leadership positions of all party structures was extended for more six months effective 20th November, 2021 to the 20th May, 2022 when the party shall organize fresh elections.” Mr.Todwong stressed.

“During these internal elections,” he adds, “approximately 2.5 Million positions shall be competed for at all levels countrywide, and this will mark the beginning of reawakening the mass party as it targets renewing its mandate for 2026 national electoral cycle.”