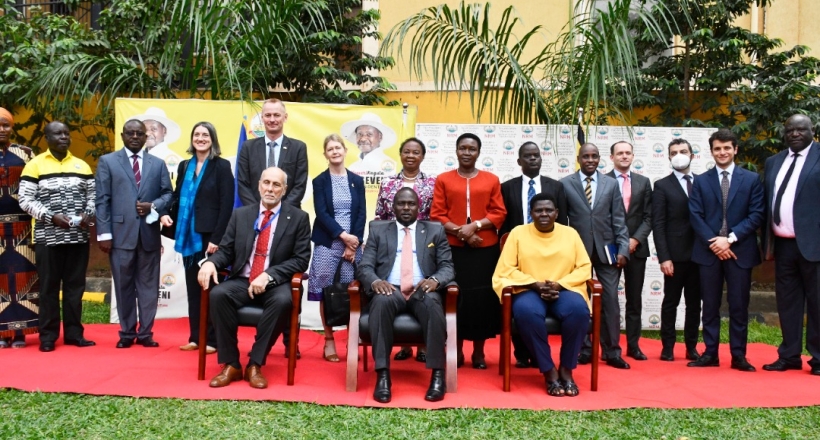 The Secretary-General of the National Resistance Movement Rt.Hon. Richard Todwong has said his party and the Government are committed to protecting and preserving the human rights of all people including those in the opposition.

Todwong who led the top management at the party secretariat in Nakasero, Kampala made the assurance today Thursday while meeting a delegation of the Ambassadors from the European Union (EU) led by H.E Attilio Pacifici. The countries represented in the meeting included; Germany, Belgium, Denmark, Ireland, Sweden, France, Italy and Netherlands.

Hon. Emmanuel Dombo, the Director for communication while addressing the media on behalf of the Secretary-General said, “The NRM party since its inception many years ago has endeavoured to preserve and protect the rights of everyone including those that are opposed to it. It is not our culture to mistreat and vindicate people with views and opinions that are contrary to ours.”

The NRM boss also emphasized that the government has put in place all the necessary laws and institutions like the Uganda Human rights commission, Equal Opportunities Commission, and Uganda Police among others to ensure that the rights of all citizens are not violated.

“I urge all institutions of government-mandated to enforce observation of human rights to fulfil their responsibilities as expected,” Dombo said. On the issue of food scarcity and hunger in some parts of the country like Karamoja, Hon. Dombo said the government was cognizant of the challenge, hence revealing that it is being handled in line with the manifesto already under implementation through initiatives like the parish development model and operation wealth creation.

“The government is well aware of the issues of hunger and food scarcity in some areas and they are tackling it. The good thing is that they have come a time of the State of the Nation address and budget reading,” the party mouthpiece said. Food, basic commodities and fuel prices in the country in the recent months have shot up due to the existing global challenges caused by the Ukrainian war.

Hon. Dombo said the ruling party is always ready to discuss any issues and concerns that aim at improving cooperation and working relations between Uganda and the European community.

The successful meeting as described by Mr Dombo held today is a follow-up to the one convened last year (February 2021) before the country went to the general elections in which President Yoweri Museveni emerged victorious. Climate change According to Mr Dombo, H.E Attilio Pacifici, the European Ambassador asked the NRM party and the Government of Uganda to Champion the issues of averting the negative effects of climate change on the world population through adopting environmentally friendly policies.