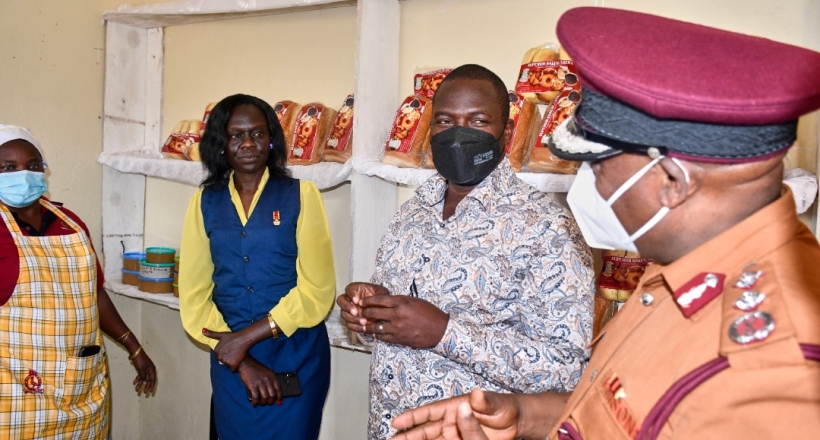 The Secretary-General of the ruling National Resistance Movement (NRM) party Rt Hon Richard Todwong has applauded the Luzira prisons leadership for their deliberate initiative that empowers and prepares prisoners with necessary income-generating skills ahead of release.

Todwong spent the better part of Sunday afternoon in the precincts of Luzira prison touring various projects like furniture making, baking, carpentry and joinery among others that were being undertaken by the correctional facility.

The NRM boss first visited the Upper Maximum prison section to interact with prison heads and thereafter went on to check on the conditions of the inmates. He was later led on a two-hour tour to the furniture workshop and showroom, bakery section of wardens’ spouses, and a visit inside the state-of-the-art market with over 1000 traders’ capacity that is still under construction.

In his speech as Chief Guest to a section of political leaders of Luzira prisons parish and spouses of prison wardens who were gathered at the Prisons Academy and Training facility, Todwong said he was thrilled by the outstanding works being done in the barracks.

He promised to lobby government and private enterprises for support and seek markets for their products to encourage mass production.

“I have been challenged by the works presented to me by the wives of prison wardens and inmates at the bakery and the high quality and competitive furniture respectively. These initiatives are in line with NRM’s current manifesto and the president’s call for socio-economic transformation,” Todwong said.

Todwong also donated 20 million shillings to women to be invested in their SACCOs by buying more machinery required in their business income-generating activities like bakery, hairdressing, and tailoring among others.

The Commissioner of Prisons Service in charge of Estates and Engineering Mr Gelevas Tumuhimbise said the idea of projects is meant to equip prisoners who are serving their sentences to attain economic productive skills ahead of release.

“For the last eight years, we have been training and equipping prisoners with life skill abilities ahead of post-prison release to adopt positive behaviour to enable the prisoners to deal effectively with demands and challenges of life after sentence. We are glad to be contributing to the growth and development of our country in this manner,” Estates Commissioner, Mr Tumuhimbise said.

He stressed that the prison’s core mission is to transform every inmate into a responsible and productive citizen of Uganda, adding that: “This is part of the rehabilitation process that is part of our core mandate as an institution of the state.”

The women who made their communication through a memorandum to the Secretary-General read by their leader praised the NRM party for being a pro-people hence enjoying massive support for now over three decades.

The women who confessed their love for the ruling and mass party asked the party leadership to arrange for them training and orientation in the Kyankwanzi leadership institute to align with the right progressive ideology.

On the invitation by the Rt.Hon.Todwong, the National Coordinator of the Emyooga program, Ritah Namuwenge said she had picked great interest in what the women were doing and promised to support them with financial assistance to boost production and increase homestead incomes.

She revealed that 70% of families who were in the subsistence economy before the introduction Emyooga initiative had since reduced to 37%.

“This gives me great confidence that with the emergence of the parish development model together with the existing poverty alleviation initiatives, the remaining percentage still producing for the stomach will be integrated into the money economy,” Namuwenge said.