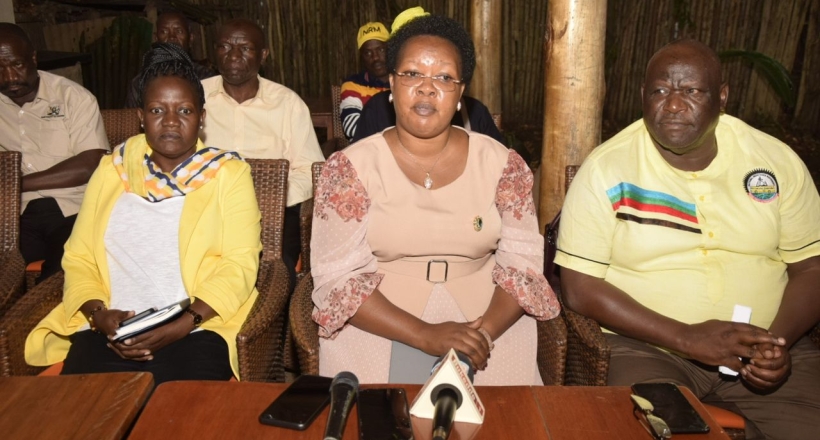 After winning a hotly contested Soroti city east by-election yesterday, leaders of the National Resistance Movement party have vowed they are not about to relent until all the remaining byelections are secured. There are 3 more fresh polls in Bukimbiri county in Kisoro, Gogonyo in Palisa and Busongora south in Kasese districts being organized by the National Electoral Commission.

In a media briefing held today in Kisoro town a head of Bukimbiri campaigns that begin next week, top NRM and Kisoro district leaders who were led by the deputy National Treasurer, Hon. Jacqueline Kyatuhaire said the ruling party is ready and determined to register victory in the remaining constituencies.

“The ruling party has historically enjoyed massive support in Kisoro district. We therefore aim at consolidating our support by explaining the existing government programs that are benefitting our people,” Hon. Kyatuhaire said, adding, “this same strategy has earned us success in the concluded byelections of Kayunga district, Omoro and in the just concluded Soroti city east.”

“We are inspired by the Soroti city victory, it gives us a challenge as Kisoro leaders to double efforts in our quest to reclaim our lost victory due a court decision,” Hon. Nyirabashitsi said.

“In the coming days, we shall reach out to everyone to remind them of their opportunity to choose a right party (NRM) and a right leader Hon. Kwizera,” she added.

Hon. Emmanuel Dombo, the NRM’s director of communication and Public Relations downplayed the internal bickering among some sections of party leaders, stressing that the ruling party has withstood a test of time and therefore cannot be adversely affected by such.

“The National Resistance Movement is bigger than everybody. That is why it has prevailed over any form of contradictions among some leaders and has not dissuaded us from the core objective of winning elections,” Dombo revealed.

He added, “our supporters are firm and cannot be diverted by interests of individual leaders.”

Mr.Dombo called on leaders and electorates within the upcoming byelections to jointly mobilise support for NRM candidates in order to sweep the remaining polls.

Members of Kisoro district NRM conference shall tomorrow Saturday convene to devise a campaign strategy for party’s favorite candidate in the Bukimbiri poll.

Nominations of interested aspirants are set for Monday and Tuesday next week.