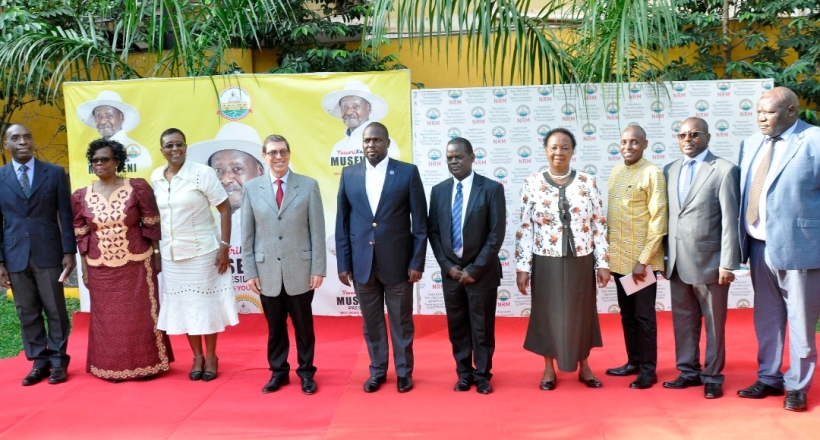 The Secretary General of the National Resistance Movement (NRM), Rt.Hon.Richard Todwong on Sunday evening met and held talks with the Foreign Minister of the Republic of Cuba, H.E Bruno Rodriguez Parilla at the party Secretariat at Plot 10, Kyadondo road in Nakasero, Kampala.

During the meeting attended by NRM party officials, together with the Cuban delegation of senior government leaders, several pertinent issues that concern both Uganda and the Republic of Cuba were discussed.

The Cuban officials who flanked His Excellency, Rodriguez to the meeting included, H.E Tania Perez, the Cuban envoy to Uganda, Mr. Angel Villa Hernández (Ambassador and deputy Director of the General Bilateral Affairs in the Ministry of Foreign Affairs) and Mr Noel Quesada Gonzalez, the Head of the Office of the Minister of Foreign Affairs.

Secretary General, Todwong praised Cuban government for maintaining historic ties with the Government of Uganda and re-assured the officials that his party is committed to strengthening their cordial relations.

"Uganda and Cuba have had historical collaborations and partnerships in areas of science and technology, education, agriculture and the protracted fight for freedom and independence. Uganda will deepen its relationship with Cuba in the areas of exchange of technology as well as diplomatic relationships,"Todwong said as he welcomed the Cuban delegation.

He expressed confidence that the visit will have great significance to the country and more importantly to the NRM party.

The Party's director for Diaspora Affairs, Maj (Rtd), Awich Polar, while addressing the media after the meeting said the two counterparts had a good opportunity to affirm the deep and enduring ties between the ruling parties of the two countries.

“We have agreed to strengthen exchanges and mutual learning with the republic of Cuba and contribute more wisdom and strength to the sustainable development of both sides,” Maj. Awich said.

“For over three decades, the two countries have supported each other and worked together to overcome difficulties, bringing Cuba-Uganda relations characterized by mutual benefit, ideological development, and benefits for the people into a new era,” the NRM ideologue added.

He assured supporters of the ruling party and Ugandans that the two parties were ready to work towards jointly safeguarding peace and stability, promote economic recovery, improve people's well-being and advance to secure a shared future.

Early this month the Rt Hon Todwong on behalf of NRM party entered an agreement with the Russian united party representative to enhance work relations, ideology and cadre development.

The above engagement was followed by another virtue dialogue held between Maj Awich and director of external relations of the ruling Communist Party of Cuba.