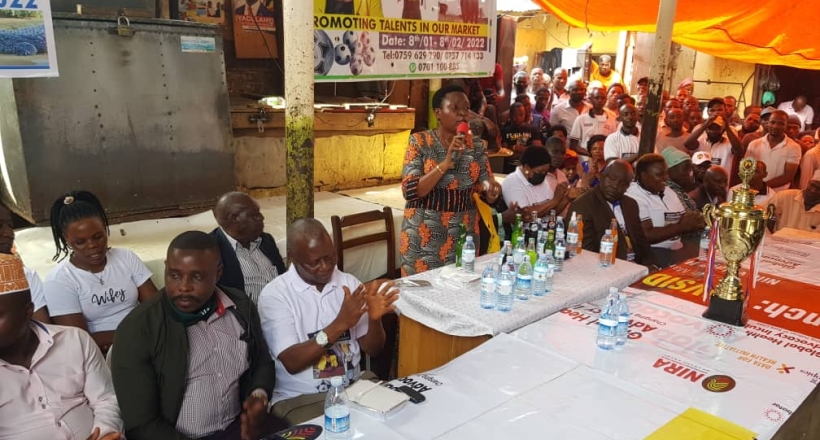 The NRM director for Mobilization, Recruitment, and Cadre Development, Rosemary Nansubuga Sseninde, has assured traders in Owino Market that President Museveni is very much committed to ensure that their businesses grow and their lives are improved.

At the function, the former legislator said that while still an MP she had petitioned Parliament to ensure justice for Owino, which was at the verge of being grabbed and destroyed by unscrupulous people. She told the traders that she was also their ‘buddy’ and wanted to move forward with them. She assured them that the president had directed that the current leadership committees in all city markets should remain in place, and that the General from Rwakitura meant well for Owino. The NRM mobilizer urged traders to shun selfish and misleading politicians, adding that they should instead seek the intervention of the government whenever they have issues.

Sseninde also assured the traders that markets will benefit from the Parish Development Model in a special way. She promised to keep in touch with the KCCA and market leadership to ensure that traders benefit from the PDM. The head of NRM’s mobilization directorate also called on Owino traders not to politicize development programs and to reject lies and propaganda so that all people can benefit from the programs regardless of their political party affiliations. She equally advised them to prioritize their work and to support leaders such as Kushaba, Museveni and others who want to see them progress, further promising to keep checking on them as she monitors government programs.

Sseninde revealed that government would soon embark on a sensitization campaign to make sure that people in markets understand the PDM and use it to create more wealth. She called on the traders to change their mindset and utilize the peace and security the NRM government has managed to sustain for decades now to ensure that there is something in their pockets and on their accounts. “Use this opportunity to improve your lives,” Sseninde said, before donating Shs800, 000 to the Goonya Traders SACCO on top of the Shs200, 000 that Chairperson Kushaba had given.

Gonya Zone which won the football final received a bull from President Museveni in celebration of their victory in the final match played at KCCA’s Lugogo Stadium last week.

In her remarks during the celebrations that brought excitement to Owino Market on Tuesday, Kushaba saluted Sseninde for petitioning Parliament to resolve the issues of Owino Market, which saved the market from being grabbed and destroyed by unscrupulous people. She also praised traders for having confidence in her to lead the market to greater heights. Kushaba equally lauded Suzan Cup organizing committee for a job well done in ensuring that the competition was a success, adding that, the tournament had been organized to promote talent of the youthful population that run their businesses in Owino.

She informed the NRM mobilization boss that the young people had shunned the ruling party because they were being harassed by some members in the party. She however explaned different issues traders face in the wake of covid-19 pandemic.

“The youth had a lot of issues they want the government to resolve and traders, like many other Ugandans, were battered by the Covid19 pandemic and its effects. They need help to ably revive their businesses,” Susan asked the NRM chief mobilizer to help Owino Market traders access Parish Development Model (PDM) funds, saying they missed out on Emyooga. She also asked government to help promote talent in Owino, saying the market was full of very gifted footballers, athletes and singers.

Kushaba who is hailed for organizing Owino Traders when she became chairperson by put up structures and pushed for consultative leadership and embraced dialogue with antagonizing forces noted that Owino market traders are very peaceful people, urging NRM party to support them in their businesses.

“Our people in Owino don’t hate the government, they don’t want to join demonstrations. They just need help so that they can work and have money in their pockets. Most of the funds for women and youth programs have not trickled to the markets. These people just want help and better services,” Kushaba noted.