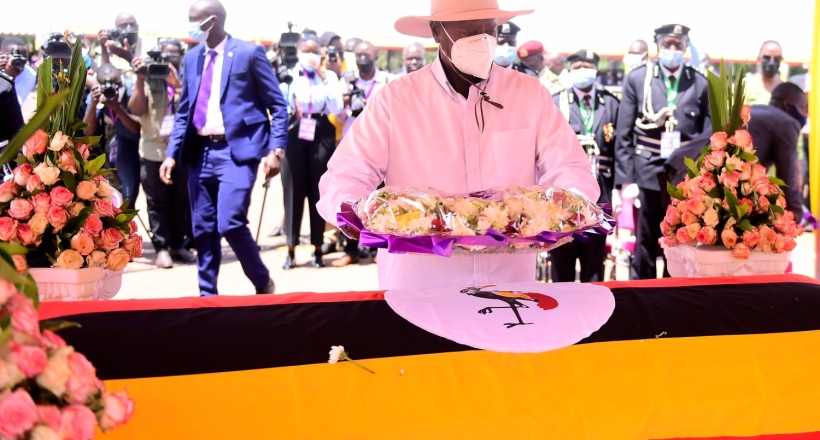 President Yoweri Kaguta Museveni who is also the NRM national chairman has praised the deceased former Speaker of Parliament, the Rt. Hon. Jacob L’okori Oulanyah for serving the country well.

Speaking during the memorial service for the Speaker emeritus Oulanyah held today at Kololo ceremonial grounds, Museveni said the deceased, who was also the party vice-chairman for Northern Uganda, had not been in the NRM party for long but made a big impact.

“Oulanyah was young but had already made impact. As NRM, we started dealing with him when he was the chairperson of the Parliamentary Legal Affairs committee, although he was still in UPC, but we noticed him and saw that he had potential," Mr Museveni said, adding: “When we supported Oulanyah to take up the duties of Deputy Speaker, he took that time to multiply his talents. Losing him at this time is a big loss because he was coming up and the country was going to benefit from him.”

The President said that after being elected as the NRM vice chairperson for Northern Uganda, Oulanyah helped to unite the country in a short time, a job he said is commendable.

“When he became vice chairperson, in a short time he had deepened unity. I need to salute Oulanyah and commend him as an example.”

Mr Museveni pledged government support dor all the projects that the speaker had started including the Jacob Oulanyah Education Trust fund to benefit his children.

"I want to salute the Chief Justice for the idea of the Oulanyah Education Fund. Instead of just crying and mourning, you should be looking at how to help the children. Government will contribute to that fund so that the children continue.”

The Speaker of Parliament, the Rt Hon Anita Among said the death of her former boss is a big loss to the country.

“For us that had an opportunity of working with him [Oulanyah] know that he was a man of many attributes. Full of humor, energy, and zeal, he executed his duties with utmost diligence and dedication. We shall greatly miss Rt. Hon. Jacob. The Bible says, “We shall know them by their fruits.” The nation is mourning Jacob because of his fruits, “Among said.

She informed the President that Parliament had voted to honour March, 23 every year as the Jacob Oulanyah memorial Lecture Day in remembrance of his works and legacy.