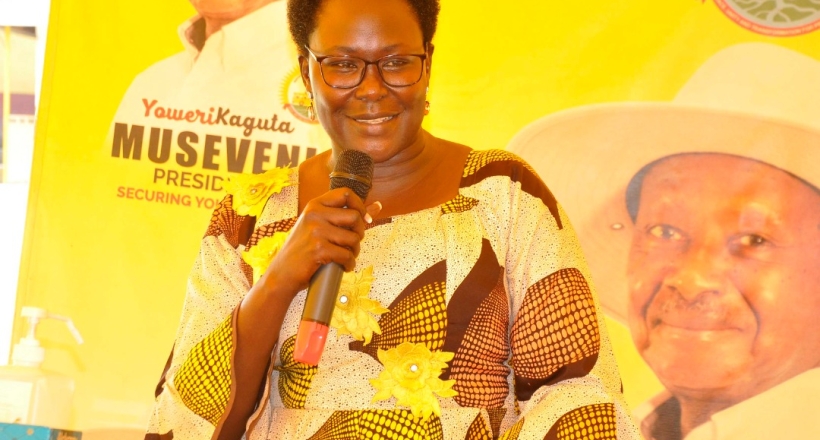 Amolatar district woman Member of Parliament and renowned academic Hon.Dr. Agnes Atim Apea has called upon leaders at all levels to go down to the villages and sensitize the population about the existing government programmes like parish development model(PDM), Emyooga, operation wealth creation among others if locals are to alleviate themselves from poverty and join the money economy.

Dr Atim Apea made the plea yesterday during the 21st Ideological clinic at the National Resistance Movement (NRM) secretariat at plot10 Kyadondo Road, Nakasero where she was delivering a keynote address on the topic; unpacking socio Economic transformation principle.

She said government initiatives like the newly launched parish development model if well embraced by the rural population will improve their purchasing power and uplift them from subsistence production into a real money economy.

“The parish development model has been designed to improve on the purchasing power of our rural population.

"I, therefore, implore my fellow leaders at all levels whether political, cultural or religious to stop lamenting and instead sensitise and encourage the population to embrace this model of development because it is focused on curing the wealth problems of our people,” Atim said.

Hon. Atim, also locally known as Mama Rice(due to her contribution to rice growing in Amolatar district) said the parish development model will also help in solving the farm input distribution challenges, attributing her argument to governments’ resolve of dodging bureaucracy and instead directly send money to parishes where they will be managed by select committees.

Dr Atim, however, decried the challenge of ideological disorientation among the majority of the population who despite the government’s interventions fail to transform themselves due to poor mindset.

Atim, therefore, urged political, technical and community leaders to intensify training and orientation to the rural population before rolling out transformative programs to be able to achieve social economic transformation which is embedded in the National Development Plan III and vision 2040.

According to the legislator, the country will only achieve the above set goals and objectives provided Ugandans especially public servants have become more patriotic and nationalistic, that is, prioritizing the greater good of the population before self-actualization.

In her remarks, NRM deputy secretary-general Hon. Namayanja Rose Nsereko reiterated that the parish development model will succeed due to the red tape that has been cut off hence easing accessibility of funds to the people at the village levels.

Namayanja added that the NRM party leaders are to be empowered at all levels to effectively monitor and supervise the implementation of all government programs in their areas of jurisdiction.

She also commended President Yoweri Museveni for the ‘Musevenomics’ (speeches and publications done by President Museveni advising people on improving their lives) which have seen the country’s poverty levels drop from 80% from 1986 to 39% today.

The renowned NRM ideologue also said PDM is a great thought-out process that stems from the performance of the country economically over the years through different regimes to date.