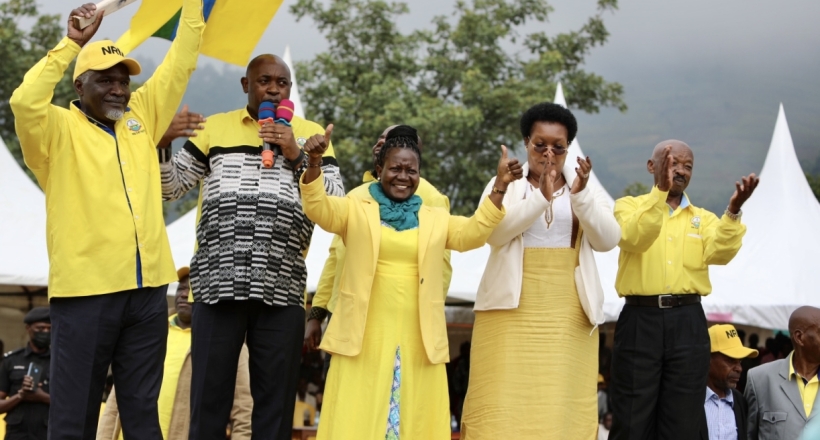 Delegate members of the National Resistance Movement (NRM) party from Bukimbiri County have endorsed Mr. Eddie Kwizera Wagahungu to fly the party flag in a race to fill the constituency parliamentary seat in the upcoming by-election.

During a constituency conference convened by NRM top leaders on Saturday at Rubuguri town council grounds, Bukimbiri County in Kisoro district, leaders said Mr. Kwizera had proven to be competent and developmental to the area despite the little time he had occupied parliament before he was ejected out by a court decision.

“In just one year in parliament, Kwizera has been able to lobby government to rehabilitate so many of the feeder roads that lead to tourism destinations in the area. This has also enabled easy transportation of our goods hence improving our household incomes,” local leaders said as they drummed up support for the NRM candidate.

The NRM vice chairperson for western region, Hon. Dr. Chris Baryomunsi who unveiled Mr. Kwizera by handing him a party flag amidst chanting supporters said government has already approved two tourism roads to be tarmacked to smoothen movement of tourists to Bukimbiri, thus asking electorates to support the ruling party candidate who will remind the president about the promise.

“We came here to advise you on the right choice to make in the upcoming poll so that you don’t miss out on your share during budget resource allocation and implementation of its development plans,” Hon. Baryomunsi stated.

Minister also advised voters to choose a candidate with substance and better manifesto other than promoting tribal or religious campaigns.

“I am reliably informed about some leaders who want to blind you with religious talks. That is very dangerous and should be resisted.

The NRM party believes in leaders with bear positive visions and missions of their people not those who promote politics of division,” Baryomunsi advised.

“We believe in transforming people’s lives through service delivery through sectors like education standards, health, and infrastructure among others,” Vice chairman clarified.

She called upon voters in Bukimbiri County not to relent until Kwizera wins and goes back to parliament.

“Kwizera is your bridge to link you to government and other decision making bodies. I implore you to send him back to the August house to steer development in your area,” Hon. Kyatuhaire appealed to locals.

Director for Communication, Hon. Emmanuel Dombo Lumala said the President and government were formed last year after general elections and given mandate for five years, thus asking locals to support an NRM member of parliament who will work well to implement the current party manifesto.

Addressing the delegates shortly after his endorsement, Mr. Eddie Kwizera Wagahungu pledged to work hard to deliver all his promises.