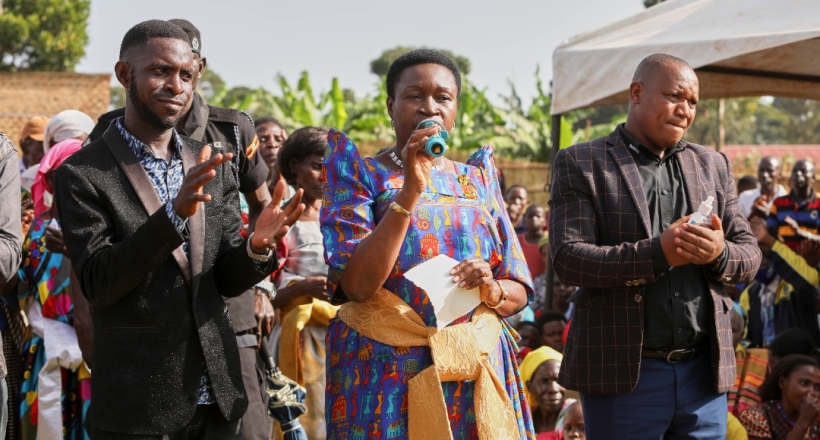 The Director of Mobilisation at the National Resistance Movement (NRM) Secretariat, Hon. Rosemary Nansubuga Seninde has assured Ugandans of President Yoweri Museveni and the government's commitment to fighting poverty and uplifting them out of subsistence production into the money economy.

Seninde who was speaking to a section of residents of Buwama town council in Mpigi district said that after restoring peace and security, the government's focus is now on improving the lives of ordinary citizens as they extend financial assistance through projects like the Emyooga and the Parish Development Model(PDM).

During last week's 2022/23 National Budget reading to Parliament at Kololo ceremonial grounds Finance Minister, Hon.Matia Kasaija, revealed that starting with next year's financial year, the Government will inject over a trillion shillings into the popular PDM project for people to access credit. Each parish of the 10,000 parishes countrywide shall receive 100million to boost agricultural production and value addition.

"As the government endeavours to provide you with assistance, I discourage lamentations and blaming games on the Government over increased poverty.
Don't blame President Museveni for poverty because his government has had a track record of fighting poverty through various initiatives, citing programs like Emyooga, Entandikwa, and Prosperity from All but blames their failure to frustrated by corrupt and selfish officials," Seninde said.

The NRM's National chief mobilizer said the war on poverty is not only a Government responsibility but should be a shared responsibility to the citizens.
Seninde advised interested beneficiaries to organize, coordinate and work together with the government by forming SACCOs for easy management.

On women's council elections that are due for July next month whose voter registration ended yesterday Friday 27th, Seninde called upon all eligible NRM supporters to not only mobilise fellow women but also massively turn up to cast their votes on the polling day.

"To my fellow women, I request that we don't take chances. let us come out and vote for the leaders that will coordinate with the government to ensure there is service delivery," NRM's ideologue said.

She however cautioned participants in the forthcoming elections to shun violence as she appealed for consensus-building where possible.
Some of the party leaders who spoke decried police mistreatment whenever they convene meetings to propagate the government agenda.

Hon. Seninde resumes her tours in the central region on a fact-finding mission to establish the Support and popularity of the ruling party that has been in power for over three decades.