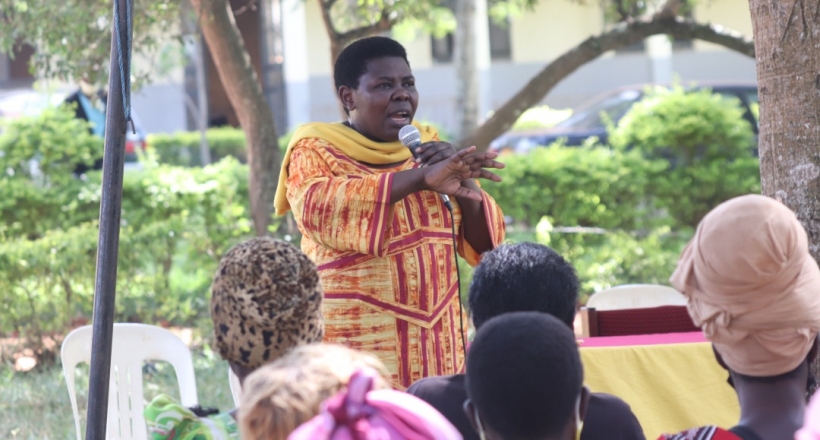 The NRM Deputy Secretary General, Hon Namayanja Rose Nsereko has urged the women of Kayunga district to vote for the party flag bearer Andrew Muwonge in the forthcoming LC5 by-election.

“I know there is a woman in the race but she is on the wrong side. By voting Muwonge, you will have ensured that Kayunga gets the services it needs from the Central Government. By voting the NRM candidate, you will have gotten someone who will directly call President Museveni or the Prime Minister to come to the rescue of the people of Kayunga in case any arising issues,”Namayanja said.

Namayanja made the call while addressing the NRM Women Council leaders from all the sub counties that make up Kayunga district at Namagabi Secondary School.

Namayanja who was speaking amidst cheers from the women leaders told the gathering that by voting for the NRM candidate the people of Kayunga will have ensured not only service delivery but also made the right choice for the prosperity of their people.

“You know the NRM has empowered women at all levels. Look at the Prime Minister, the Vice President, myself the NRM Deputy Secretary General and our Director for Mobilization, Hon Rosemary Sseninde are all women. No one has empowered women like the NRM and President Museveni have done. This means the NRM recognizes women and has a special place for them. Therefore, it is high time you voted for the NRM candidate.”

“When you return home, move house to house asking your fellow women and other people that on 16th December, the only person to vote is Andrew Muwonge. He is your son who is not looking for a position but is here to serve his people.”

The NRM Deputy Secretary General also warned the gathering against voting for candidates who are not reliable by jumping from one position to the other.

“Vote for your own son that you have groomed well and not the other ones who are jumping from one position to the other. On election day, don’t be intimidated by anyone but go and cast your vote for Muwonge,”she noted.

The NRM Director for Mobilisation, Rosemary Sseninde Nansubuga said by moving house to house, the women leaders should each get at least 10 people to vote for the NRM candidates.

Kayunga will on Thursday, 16th December vote its next LC5 chairman after the death of Ffeffekka Sserubogo.