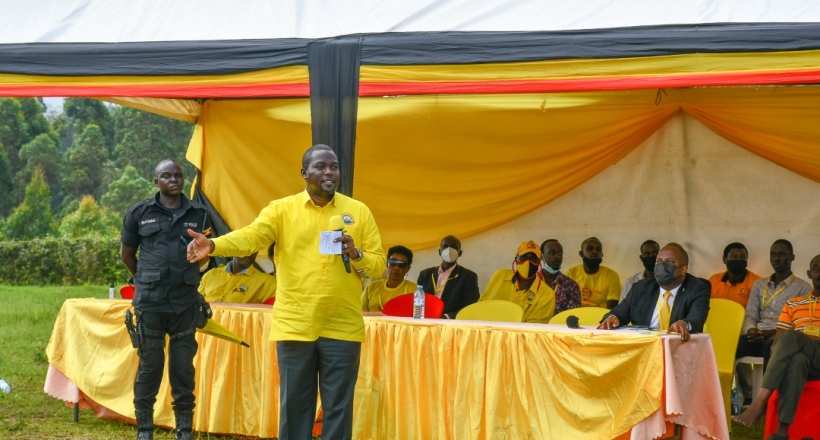 The NRM party Secretary General Rt. Hon. Richard Todwong has asked Sheema district NRM leaders to end bickering and concentrate on improving people’s welfare who are the sovereign from whom the powers to lead emanate.

Todwong made a call while officiating at the Sheema Municipality council meeting organized by the area Member of Parliament, Hon Dicksons Kateshumbwa at Sheema Municipal council headquarters, Sheema district.

He said that skirmishes and contradictions among leaders have costed them valuable time which would be spent on more productive activities.

“I came to realize that ever since the parliamentary elections ended, we have spent a lot of time bickering because of our individual interests. Given that we are many and our interests are very competitive, we have kept on fighting each other. But I urge you to learn to differentiate between petty politics from principled politics. We need to re-organize ourselves and move on,” Todwong said.

“We should know that the party is bigger than all of us, therefore we should not spend time fighting. To me it shows that we are not ideologically grounded,” he added.

The SG also said that NRM party is able to overcome all these problems since it is built on a firm foundation. He referred to the party constitution’s schedule four which guides members’ conducts, asking leaders to be conversant with the rules that regulate their behaviour to avoid doing contrary to the party expectations.

Todwong clarified that, those fighting for positions in the party structures especially Sheema NRM district chairman should hold fire since structure elections are going to be conducted soon.

“The offices of our structure leaders expired and they were extended for six month effective December 2021, until end of May. Therefore let us be patient and wait for the election to resolve this puzzle, given that all of you are in acting capacity,” he clarified.

He therefore implored all development seeking leaders to refrain from parochial and petty skirmishes that hinder development of Sheema.

The SG promised Sheema district antagonizing forces that all the matters will be brought to the attention of the party chairman and the lasting solution will be reached.

The government Chief whip who is also Ruhinda North constituency Member of Parliament Hon. Thomas Bangirana Tayebwa encouraged other Members of Parliament to pick a leaf from Hon. Katesh and call for council meetings in their constituencies to discuss matters affecting people they lead.

“I encourage all other MPs to call area delegates to discuss issues affecting NRM. Such a meeting in Sheema is a sign of peace and the use of concerted efforts to solve their differences have paid good results. Sheema is now united,” Tayebwa said, adding “Many people have been diverted, but I urge you to remain united.”

The Sheema Municipality Member of Parliament Hon. Dickson Collins Kateshumbwa said that the reason for being in politics is to serve people who give us the mandate to lead them. Lack of unity, he adds, will paralyze our efforts to develop our people.

“I want to call upon everyone to embrace unity. The election ended a year ago so we need to concentrate on service delivery,” Kateshumbwa said.

Sheema municipality and the district at large is lacking a lot in household income. Let the government services be delivered and reach people. I therefore condemn any acts of division. The party is bigger than all,” Katesh as he is popularly called by his diehard supporters pointed.

Following the hotly contest parliamentary election between Hon. Dickson Kateshumbwa, a former URA commissioner and Dr. Elioda Tumwesigye a four term legislator and former Minister for Science Technology and Innovations, Sheema municipality has had some divisions among leaders. But Kateshumbwa said that with Rt. Hon. Richard Todwong at the helm of the party, all differences will be solved.

Before joining Sheema Municipality council members, the Secretary General together with other party leaders from the secretariat led by the area MP Hon. Kateshumbwa paid a courtesy visit to Mama Joyce Makaaru to pay respect to the late Cannon Mzee Yowasi Rwamango Makaaru, a former greater Bushenyi district Chairman and presidential advisor on political matters.