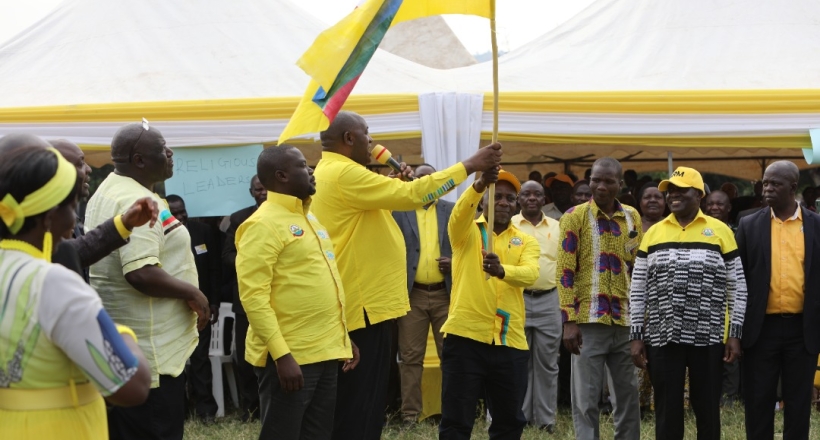 Hon.Baryomunsi made the plea today at Muhokya primary school grounds, Muhokya Town council during a county conference of delegate members of the ruling party which convened to show solidarity and support of Mr. Mujungu.

“It is inevitable that you send back Mr. Mujungu to parliament to ensure that there is steady progress and keen follow up on President Museveni’s pledges until they are fulfilled,” Dr. Baryomunsi said, adding,“ voting an opposition or independent candidate only leads to  retrogression and worse situation.”

“I ask that you don’t shoot yourselves in the foot by choosing any Member of Parliament other than the NRM flagbearer. On the voting day, only look for the bus,” the minister said as he guided delegates on the right choice to make.

The NRM Secretary General, Rt. Hon.Richard Todwong who also graced the occasion took a swipe at some of aspirants who defied the party guidance and instead, chose to run as independents.

“The rules, regulations and decisions of party top organs bind all of us. I therefore, call up all NRM leaning independents to withdraw from the race and support the ticket bearer as a sign of respect to the National Chairman, Yoweri Museveni,” Todwong said, noting that, “we all need to unite and jointly face off with our opposition rivals.”

With solidarity of troops, the Secretary General is confident that the party flag bearer will clinch the parliamentary seat with a landslide win on the polling day.

Going forward, Todwong promised to engage disgruntled party leaders from Busongora South if any so as to forge unity ahead of the by-election.

He drummed up support for Mujungu noting that through him, the NRM government will court all issues affecting residents and seek to resolve them.

Rt.Hon. Todwong asked the people of Kasese to shun politics of tribes and religious affiliations. “NRM brought good politics which cherishes progress. The bad politics of hate and divisions ended with past regimes. We are one nation and nobody should be criminalized for belonging to one tribe or another.”

The State Minister of ICT in charge of National Guidance, Hon Godfrey Kabyanga, who also hails from Kasese district said opposition Members of Parliament have no influence in decision making, hence calling up the electorates to vote for a candidate that will be able to lobby government on service delivery up to the local person.

While updating the Secretary General on his ground mobilization in county for weeks now, Hon. Emmanuel Dombo Lumala, the director for communications & public relations said, several strategic decisions had been resolved to enable a smooth and electrifying campaign process.

In his speech to delegates, moments after receiving the NRM flag as a sign of endorsement, Mr. Thembo Mujungu promised an inclusive campaign process and hard work to ensure that victory is delivered.

Dr. Chrispus Kiyonga, the Kasese district NRM chairman challenged local leaders to sacrifice time and go out to campaign for their preferred choice.

The conference was also attended by Maj (Rtd) Okwir Rabwoni, the party’s Director for Youth and Institutions who asked the multi-ethnic residents of Busongora to live together in harmony without conflicts.

Voting for Busongora county south Member of Parliament is scheduled to take place on 18th August, 2022.