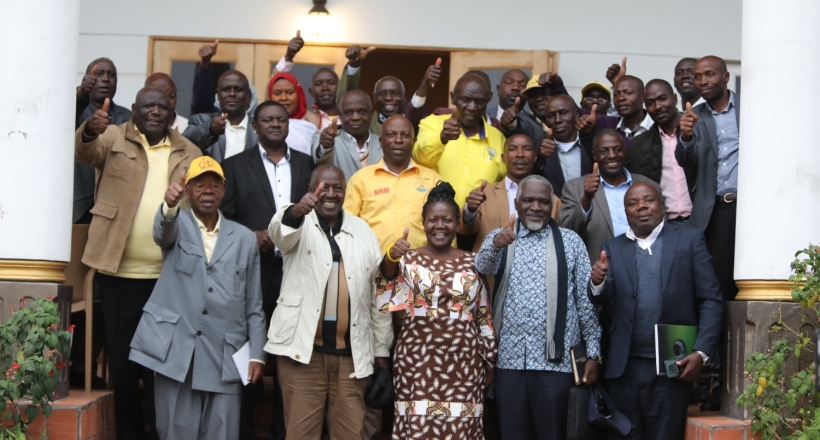 The 1st vice National Chairman of the National Resistance Movement (NRM) Rt.Hon. Al-Hajji Moses Kigongo has condemned a section of members especially some Members of Parliament on the party ticket who support and promote one of the independent candidate.

Al Hajji Kigongo who was addressing a section of Bukimbiri leaders in Kisoro municipality today said the top party leadership will not look on as some elements who claim to associate with the party are defying the party position and the will of the majority by siding with those he called enemies of progress.

“The people of Bukimbiri County voted Mr. Kwizera to carry their flag and went on to win the general election. The movement therefore cannot tolerate any one who threatens to divide the party by contravening our ideologies and core principles.

Errant members will be summoned by the party disciplinary committee and those found culpable shall face punitive measures as a deterrence to other members,” Al hajj Kigongo said.

The vice chairman underscored that the Bukimbiri poll is not about individual candidates instead their focus is on delivering victory of the NRM party.

Al hajj Kigongo lashed out at some clergy and local leaders in Kisoro district who he says have been reported to be openly campaigning for some candidates against others on religious lines.

“It is such sectarian tendencies that forced us to go to the bush to fight past regimes. We ushered in issue-based politics and encouraged unity among all people irrespective of religious affiliations,” the NRM historical leader said, adding that members of NRM are identified by core principles of Patriotism, Pan Africanism, Democracy and Socio-economic transformation.

The deputy National Treasurer at the secretariat, Hon. Jacqueline Kyatuhaire reiterated Kigongo’s message of unity and solidarity of the NRM brigade during the vote hunting.

“Bukimbiri will not end tomorrow, I therefore request for soberness and respect of each other during the upcoming rigorous campaign exercise in the coming days,” Hon. Kyatuhaire told the leaders, adding, “we are family members, if one of us wronged you. Please forgive each other for the sake of our party.”

Earlier today, the Director for Communication, Hon. Emmanuel Dombo who has been in the district to coordinate campaign activities with local leadership said the party was ready to present their candidate Mr. Kwizera to the Electoral Commission for nomination tomorrow, Tuesday at 10:00am.

“All required paperwork of our candidate have been handled awaiting to be presented to the district Returning Officer,” Dombo said as he addressed the media.

Tomorrow after nominations, Al hajj Kigongo will accompany the candidate to Rubuguru town council grounds to address the nomination rally.