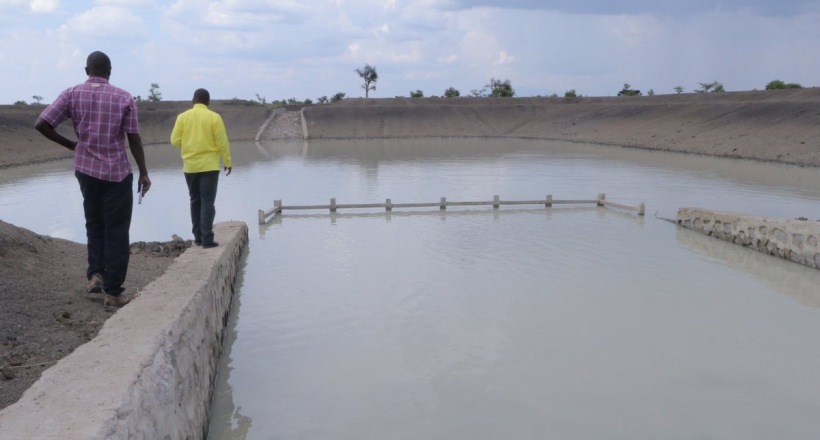 With water being a major aspect for agrarian survival, the leadership of President Yoweri Museveni has dedicated efforts to increasing access to water in Teso to promote both livestock rearing and small-scale irrigation in a bid to improve household income.

Several water projects have been completed while others are in the offing in line with the government’s plan to improve animal marketability through revitalizing the beef and milk potential across the country.

Michael Opus, 56 years, a resident of Ongongoja, say the valley tank has quenched the decade-long water crisis as it serves more than 16 villages in the long dry spells.

“The valley tank is solar-powered. The water is pumped to the tanks before it flows to the cattle troughs for consumption. The valley tank has not dried up since it was sunk five years ago,” an elated Opus says.

As a safeguard, Opus says they have a community valley tank committee which protects the water source which he says they hold very dearly.

Noami Ikorit, a mother, says during the dry spells when boreholes run dry, the water from the valley tank is their solace.

“We use that water for washing. When boiled and filtered, the water is safe for drinking,” she adds.

State minister for ICT Peter Ogwang also the MP for Usuk County, says dams such as Okuliak are already being utilised by residents who cultivate vegetables, which has boosted their homesteads’ incomes.

He says the government is committed to opening up more valley tanks in the region.

“With these valley tanks in place, communities can grow vegetables throughout the year, thus enhancing their livelihoods with a steady source of income,” Ogwang says.

Agnes Akiror, the state minister for Teso affairs, says: “I have commissioned the construction and opening of valley tanks in many districts. The onus is upon the people to harness the benefits.”

Akiror says since the valley tanks are solar-powered, there is no interruption in the water supply.

Dr Juliet Sentumbwe, the director of animal resources at the agriculture ministry, says the valley dams are a huge investment that should be harnessed by the people of Teso and Karamoja.

Sentubwe says other projects such as cattle holding centres, laboratories and communal cattle crushes will be constructed under the Regional Pastoral Livelihood Resilience Project (RPLRP), all intended to empower farmers.

She says the development is part of the government’s plan to improve the quality of livestock and prepare pastoralists to export quality cattle products.

“In Karamoja, which has bigger numbers of animals, we have put in place disease control facilities like spray races at holding centres,” Sentubwe adds.

Ben Etoyu, the former District Education Officer, who is now earning a living from vegetable farming on the irrigation project in Ojama village says he annually gets over sh15 from selling vegetables.

“Rather than relying on pension, I have another source of constant income from the sale of vegetables from my farm which is thriving because of irrigation,” Etoyu says.

Dr Stephen Kajura, the national project co-ordinator, for RPLRP at the agriculture ministry, says some of the valley tank water projects were started in January 2019, but the outbreak of COVID-19 delayed their commissioning.

“Irrespective of the pandemic, we have completed some and already handed them to the district authorities in both Teso and Karamoja,” Kajura says.

Some of the projects are located in Kotido, Katakwi, Amuria, Amudat, Abim,Moroto, Kumi, Kaabong, Bukedea, Nakapiripirit  and Napak, Kajura says.

Vicent Ssempiija Bamulangaki, the agriculture minister, says the projects have cost over $36m.

He the government plans to construct meat processing plants in both Teso and Karamoja to empower farmers to add value to the beef produced in the regions.