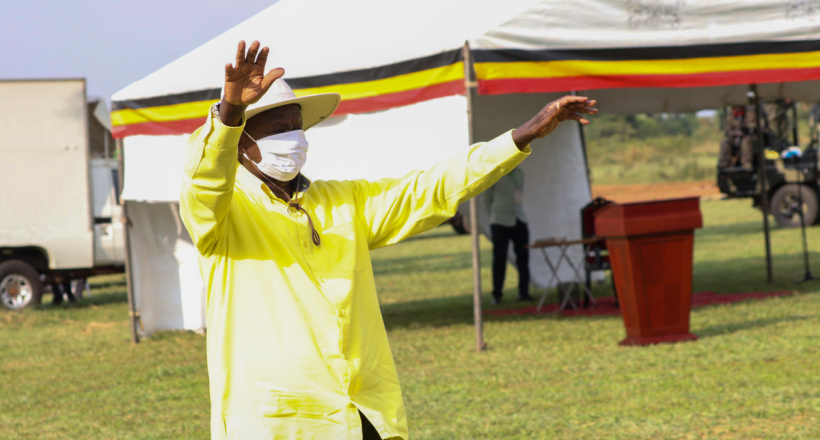 National Resistance Movement party presidential candidate, Yoweri Kaguta Museveni is today in Kabale district, where he will meet and address a select team of NRM leaders and flag bearers. He will highlight key achievements the party has registered as well as other development strategies he intends to achieve once re-elected.

NRM has always scored high in Kigezi sub-region due to its achievements in the area among which are indicated below.

The district has 135 government aided primary schools distributed in at least 57 parishes; all these schools offer Universal Primary Education programme. The UPE in Kabale has a total enrollment of 55,135 pupils. However, the NRM policy in the next five years will be focusing on construction of primary schools in parishes without a government primary school.

In secondary education, the district has a total of 20 government schools with an enrollment of 10,474 students. The NRM policy is to have a government secondary school in every Sub County.

With the education liberalization policy of the NRM government, many private schools have been established in Kabale. Currently the district has 85 private primary schools and 32 private secondary schools with an enrollment of 9,841 and 5,714 students respectively.

While the target is to raise water coverage to 100% in the medium term, the NRM government is prioritizing the strategy of providing at least one safe water source per village in the district. Kabale has a total of 684 villages. At least 500 villages (79%) access clean water.

In the next five years, the NRM pledges to provide water sources to villages without a water source.

The government of Uganda through Ministry of Gender Labour and Social Development started giving out the special grant to PWDs in the 2009/10 financial year. The fund was given to the first 48 district; each benefiting district received 30 million. The funds were given to organized groups of PWDs in different Districts and Kabale is among the beneficiaries.

Youth Industrial Hubs are also being set up by State House in every sub region. These will train the youth in various skills like carpentry, welding, mechanics, shoe making, tailoring, knitting, weaving etc.

Since inception of the Women fund Programme in 2016, a total of 703 Projects worth Ushs 3.770 billion have been financed in Kigezi Sub- region, benefiting 8,702 women. In Kabale a total number of 124 projects have been funded benefiting 1,578 women.

Uganda Development Corporation is exploring setting up an Irish potato processing facilities in Kabale and Kisoro.  Additionally, through UDC the government partnered with Kigezi Highland Tea Factory Limited through a lease finance to set up tea factories in Kisoro and Kabale respectively. The factories are currently off taking tea grown in the two districts.This will increase the value of exports by USD. 2.4 Million per annum, enable skills development among the Youths and create job opportunities.