Kyagulanyi's claims on Luwero are unfounded 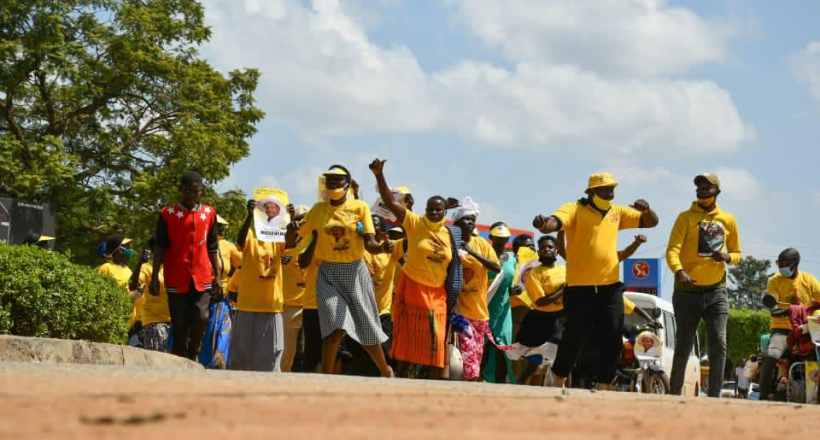 While addressing a gathering in Luwero district on Saturday, the NUP presidential flag bearer Robert Kyagulanyi said that the people are suffering from dire poverty. He also claimed that the district has bad roads and poor health services.

This is however not true. NRM boasts innumerable achievements in Luwero and promises more.

The National Resistance Movement (NRM) presidential candidate Yoweri Kaguta Museveni on Monday 9th November launched his campaigns in Luwero where he waged National Resistance Army war of 1981-1986 which ushered him into power. He met NRM flag bearers, incumbent NRM Members of Parliament and district party officials to ask them to mobilize for him for support. The launch took place at his presidential demonstration farm located in Kawumu village in Makulubita Sub County Luwero district.

Museveni and his NRM leaders are expected to campaign using achievements registered in the area in his 34 years’ rule.

In the water sector, the NRM government and Non-Government Organizations have dug 1,074 boreholes whereas, in the road sector, a total of 1527.06 kilometres are constructed among others.

On Jobs and wealth creation, NRM has created the Youth Livelihood Programs and Women Fund. In the past four years, 205 Youth Livelihood Programs have been created with about 1,486,290,291billion distributed, 1314 males and 1061 females have benefited from the program. About 99 Women fund projects have also been created with over 620,368,256billion distributed. About 1216 women groups have benefited from the fund. This has eradicated poverty in the district.

Speaking during the launch of his nationwide campaign, Museveni assured NRM leaders of Greater Luwero that his government has put in place deliberate efforts to foster development in the area.

He said that NRM government shall increase the Land Fund and use it to buy off Mailo Landowners who are willing to sell to government and allocate the land to the Bibanja owners.

The indigenous people with the land without the capacity to undertake small commercial farming, he said, are going to be supported with logistics to introduce them to the money economy. He also promised to improve agricultural mechanization through the parish model.

Residents who are engaged in pineapple growing Museveni promised them to set up a fruit processing farm to add value.

Before the NRM government came to power, some sub-counties had no single primary or secondary school and learners used to trek long distances to attend school. However, this was solved. In the health sector, at least each sub-county has health centre III, selected parishes boast of health centre IIs which have also boosted health services.

In areas where such services never existed before, residents have reason to vote President Yoweri Museveni to continue to steer the country.