The impact of the immunisation programme under NRM is evident 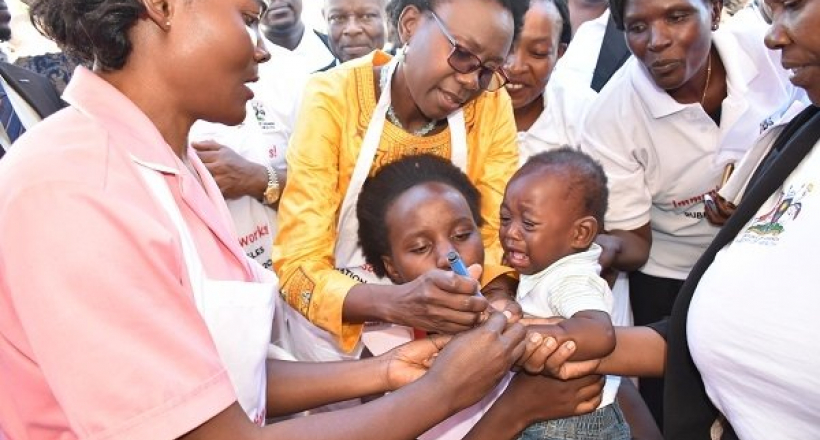 Uganda is endemic for infectious but preventable diseases such as polio, leprosy, tetanus, diphtheria, whooping cough, measles, rubella and many others. These diseases were the main causes of preventable ill health and death, especially among children. Until 1987, there was no viable programme against these killer diseases.

The immunisation programme was launched in 1987 to prevent the six childhood killer diseases (polio, measles, tuberculosis, whooping cough, diphtheria and tetanus). At that time, the average immunisation coverage was a paltry 34%. Today, over 90% of Ugandan children are vaccinated, not only against the six, but 13 diseases. It is not surprising that to date, of every 1,000 children born alive, 957 will reach 1 year (only 43 may die) and at least 944 will reach five years of age (only 56 dies). These figures show a big reduction in mortality rates from 1988 where of every 1,000 babies born alive, only 902 would reach one year (98 would die), and only 823 would reach five years of age (177 would die).

These achievements reflect deliberate efforts by NRM to improve health and build the health system. UNEPI was revitalised at the advent of decentralisation of government in 1997. From 2000, the health services were decentralised to the districts and health sub-districts. The health infrastructure was expanded to every administrative level through HCIVs, HCIIIs, HCIIs and involvement of the citizens through local councils, village health committees and health unit management committees.

The programme has however grown stronger that currently there is a good vaccine stock for two million children annually. The government has also invested heavily in training health workers in safe vaccine handling.

However, these government programmes are not only oriented against preventable diseases, but also on course to eradicate and eliminate a number of diseases in line with the global vaccine action plan. Uganda eliminated all strains of indigenous wild polio virus in 1997. The elimination of measles, rubella, maternal and neonatal tetanus as well as yellow fever is also in range.